This week, I finally went to the doctor to get checked out. I had this suspicious spot on my scalp. Not only did it turn out to be benign, but it turned out my blood pressure, pulse, and weight were all down from their usual higher levels! In fact, I’m healthier than I’ve been in several years! So to celebrate, I wanted to make something with saffron! Saffron seems like an appropriate celebratory ingredient whose color symbolizes health and good fortune.

This is a take on a classic marble cake recipe from a book called Swedish Cakes and Cookies, first published in Sweden in 1945. The original is brown and yellow, but I wanted something white and yellow.

The original recipe is called Saffron Marble Cake and contains cocoa. Since I wanted something white and yellow, I chose to omit the cocoa part, then added some coconut (macapuno) and pineapple into the two respective parts. I think it works beautifully. The pineapple and macapuno also make it very moist. 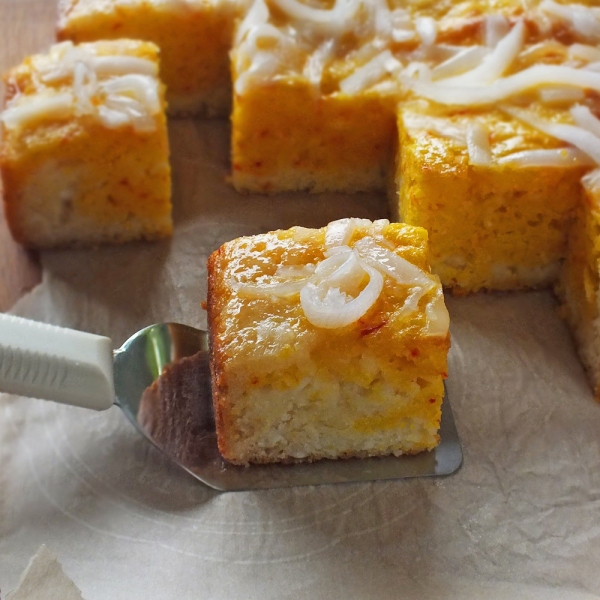 We finally finished unpacking all our stuff since moving. Why is it that there always seem to be a few boxes left that somehow one forgets to unpack? Would you believe that we somehow had four different opened bottles of saffron from our old kitchen, each one containing only about ¼ of a teaspoon and stored in different places? Crazy, huh?

That happens when you want to tidy up, but fail to sort things into appropriate storage, opting instead to just cram ingredients in various places to get them out of sight when not in use, but then later you end up purchasing more a certain item because you either forgot you still had some, or you can’t seem to remember where you stored it! Oh well, at least I found them before they all expired. I resolve to not let this happen in the new place.

I was really glad I decided to spread the remaining  4 ounces of macapuno (which is a tender, softer, gelatinous coconut product from the Philippines, usually cut into strands and packed in syrup, often sold in 12 ounce glass jars). Each slice wears the macapuno like a jeweled crown. Overall, I’m pretty content with how it turned out. Still, the reason why I put the macapuno on top was because the entire surface wasn’t marbled with yellow and white, but just all yellow in color. Somehow the yellow batter floated to the top, while the rest of the cake below still was marbled.

So, if I did this again, I may try to change the viscosity so that both the yellow and white batters are equal and will remained marbled on top as well. Just a minor critique. But that’s what led to topping it with the macapuno. It definitely gives it more visual interest, and also makes it more moist. 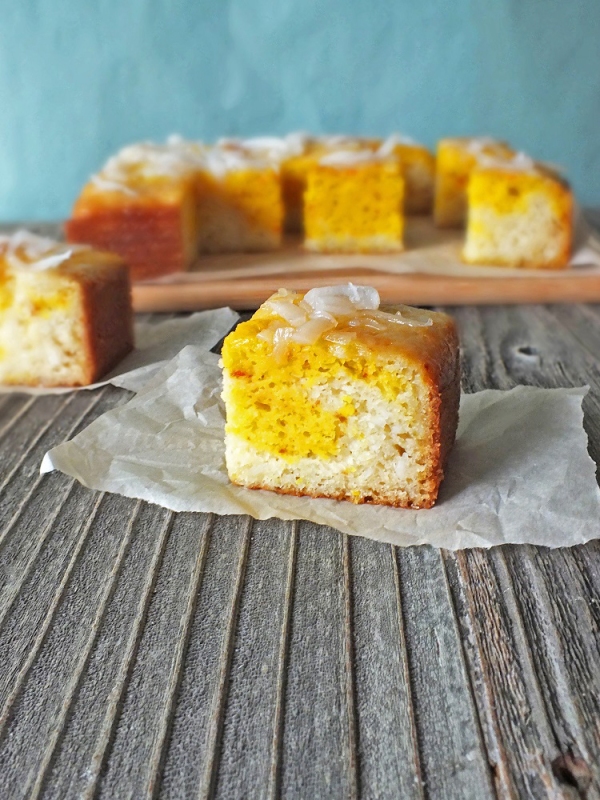 This is also a fairly adaptable recipe. The original calls for using a loaf pan, but I can easily see it being adapted for cupcakes, or even a layer cake. Enjoy!!

Preheat the oven to 350 degrees F.

Prepare an 8-inch square baking pan by greasing the bottom, adding a parchment to the bottom that overhangs in two sides, the grease the whole thing. Set aside.

Melt the butter in a small saucepan and remove when barely melted. Set aside to cool. Set the saffron threads in a small cup with the tablespoon of hot water. Set aside.

Sift the flour, baking powder, baking soda, and salt into a bowl and stir with a whisk to incorporate completely. Set aside.

In a medium bowl, mix the sugar and eggs with a hand held mixer on high until thick and very light and pale, about 5 minutes.

Add the flour mixture, alternating with adding both the yogurt and the melted butter, scraping down the sides of the bowl, as needed. Use low setting, as you don’t want to over mix.

When completely incorporated, divide batter in half, and add the pineapple to one half, and the coconut to the other.

Alternate adding batter from each half, in dollops, overlapping each to create sort of a marbled effect. Rap the pan on a counter top to level the surface and get rid of major air bubbles, if any.

Bake in the lower part of the oven for about 40-45 minutes. When done, remove from oven, and while still hot, spread the remaining 4 ounces macapuno coconut evenly to all of the top surface, using an small offset spatula, or the back of a spoon. Cool on a wire rack completely before slicing into squares and serving. 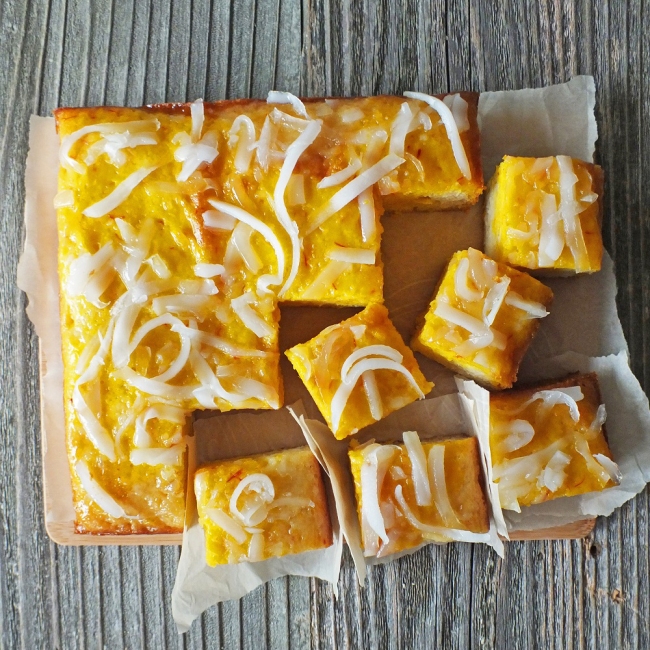 Air fryer cookies. It’s tricky cuz one minute they appear done except for a small dime-sized area underneath in center, but the next minute they are a little too browned. So do them at 350 for 5-6 minutes and take them out if they look done on top except for dime sized area in center underneath still looks a little moist but let them sit for 20 minutes and they’ll be perfect.
Perfecting the pissaladiere. Thinner crust, less precooking of onions beforehand, a well oiled pan for crispness, good quality ingredients. It’s so worth it. I could eat the whole thing!
I’m just sitting here watching the wheels go round. Or not.
Recipe development. S’more muffins. This is not yet there. Mainly the muffin part. Although it has marshmallow creme in the batter, I mainly taste cream cheese, which throws off the whole s’more vibe that I’m going for. So it’s back to the drawing board with these. Gave them to Ben to bring in to work, and called them cream cheese s’more muffins, 😆.
Chocolate Pound Cake with ganache and crumbs in a Dinara Kasko cloud mould.
This isn’t just your regular corn bread, this is pan de elote. It’s really more of a dessert than side. You can have it with coffee or serve it with some whipped cream or ice cream. So good.
Orange pound cake 🍊 with a butter rum glaze. I didn’t think I’d like the glaze because I am not a huge fane of rum, but that stuff is darn tasty!
Air fryer churros and chocolate sauce. They turned out a little puffy but Ben says he likes them this way. I think he’s just being kind cuz it’s V Day. <3 😂
Zzzzzzz.
Morning glories in the snow!
Donuts inspired by Thiebaud.
Bisquets. This is a recipe from Mexico for biscuits but the only difference I see is that they have a distinct circle indentation on the tops.
I’m a big fan of 🫒 olives, whether it’s Niçoise, Castelvetrano, or Kalamata, but I think Kalamata are the best in these sweet and salty cookies. For me, it’s not even a controversial thing to use it in a sweet recipe. After all, they are considered a fruit.
Pissaladiere. Sort of a French sweet onion, Niçoise olives and anchovy tart with thyme, rosemary, garlic and some semolina in the dough. Reminds me of focaccia but much more to it.
chocolate cherry loaf cake. 🍒 + 🍫
Peanut butter cookies with a little oat bran mixed in for heart health. Get it! 😂🤣♥️ Okay I realize that wasn’t as funny as I thought it would be. Happy VD? 🤣😂 (I’m really struggling with the humor today!)
Amarena cherry brûlée tart. I’ve been trying to think of what would make a perfect Valentines Day dessert, and I think I hit the jackpot with this. Both the pastry and the custard are not overly sweet, and the slightly sour succulence of the Amarena cherries contrasts nicely with the sweet and crisp brûlée top. Don’t forget to brulee top.
Chicken and waffles, Japanese inspired. Karaage (fried chicken) with umeboshi ginger maple syrup on black sesame waffles. First time using my new air fryer and I must say, the chicken is so light and crispy, not greasy!
Loading Comments...
Comment
×
%d bloggers like this: