This is for a potluck for a co-worker’s wedding I’m attending tonight. I just took it out of the oven and  waiting for the pumpkin cheesecake to cool down so I could put it in the fridge for at least 6 hours before the party.

I used this recipe.

I folded aluminum foil to place around the pan before placing it in a water bath, but when I took it out of the oven, I noticed some water on the inside, between the pan and the foil. So, while the top looks amazing, I’m a little worried about the crust, but can’t do anything now to check it, and just have to wait. And I won’t be able to offer anything else if the crust turns out to be soggy.

Update: It is two hours until I need to bring it, and it looks like it might be a little damp, but not too soggy. It unmolded okay; if it was soggy, it wouldn’t have been able to transfer to the serving plate. 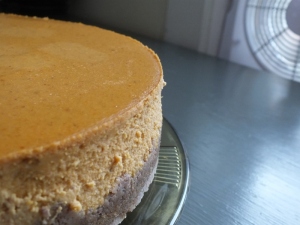 The lonesome bunny of the interurban.
Very rustic (read: messed up) almond blueberry thyme galette!
Good Morning!
Blueberry Muffins. Sometimes you just want a simple muffin made with fresh blueberries.
I do not usually use the word perfect for a recipe, but these peanut butter cookies are! If you’ve never had freshly roasted peanuts, try adding them to any cookie and they will be at the forefront!
NYT recipe for all-purpose enriched bread recipe. It’s a cross between brioche and Japanese milk bread. It is worth the wait and energy.
Enriched bread loaf, sort of cross between brioche and Japanese milk bread just proofing away. Poofing away? It still needs about an hour before it is ready to be baked. I can hardly wait!!!
Mini apple and almond cake recipe from Mary Berry!
Sometimes I wonder what kind of dreams this little guy has. He sleeps about 20 hours a day!
Roti canai with peanut curry dipping sauce. I imagine there may be someone in Malaysia enjoying some of this right now! Oh wait, it’s past midnight. Maybe not.
Blue raspberry cookies! The baking soda in the cookie dough changes the red color in raspberries to blue!
Well that was unexpected…and blue raspberry sounds like a good name for a pot product. The baking soda in the cookie dough messed with the ph in the raspberries, turning the cookies blue. Almost blue.
Loading Comments...
%d bloggers like this: