This is a recipe I’ve made often over a the years that I can now put it together completely from memory. Sometimes I’ve forgotten and have added the whole 12 fluid ounce can of chicken stock, and it came out watery, but otherwise still a good eat.
Other times, I added more vegetables, or switched the sausage to a vegan one. I’ve also substituted boneless chicken thighs for the breasts. This time around I used half breast meat and half thigh meat. I’ve sometimes added some fresh Mexican oregano to the mix, if I had any extra. I’ve made it with canned tomatillo salsa, but I’ve also made the tomatillo salsa from scratch. Just make sure that if you make the tomatillo salsa from scratch that you wash the tomatillos thoroughly, because a lot of times they feel sticky. I don’t know if that’s just natural, or something that happens to them as they are picked and transported, but one time I didn’t wash them, and the chili had a very slimy mouth feel! That was still edible, but it wasn’t such a good eat.
The tomatillos are somewhat sour, and so it pairs well with a cornbread that is a touch sweeter, such as the one featured on the side of a box of Albers cornmeal . Finishing it up with a dollop of sour cream or Mexican crema, and cilantro is a definite plus!
To be honest, I wasn’t sure if I should include this recipe here or not. With the new year, I’m still trying to figure out what I want to do with this blog. My original intent was to make it a blog strictly about baking. But since I’ve started (in August of last year) it’s been more of a selective sampling of things I made in the kitchen, and not necessarily only things I bake. Technically speaking, though, there is a baked good in this meal, so I think it’s okay to include should I decide later on that it’s strictly a baking blog.
The thing I love about this recipe is that it is relatively easy to prep and put together, as slow cooker meals often are, and it keeps well and gets better after a day or two in the fridge. And it’s relatively healthy. And versatile. I’ve eaten this in summer and winter, although I do prefer this more on a cold wintery day. I hope you enjoy! 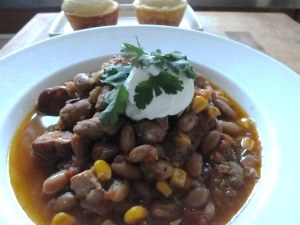 ingredients:
method:
In a large skillet, heat olive oil over medium heat. Add the onions, diced chicken, and sliced sausage; sauté until onions are tender and chicken is cooked through. Put the drained beans in a 4 to 6-quart slow cooker; add the skillet mixture and all remaining ingredients except cilantro. Cover and cook on HIGH for 3 to 4 hours or LOW for 6 to 8 hours. Top with a dollop of sour cream, if you prefer. Sprinkle with cilantro just before serving. Serves 6.

Roasted Garlic Bread with marjoram, sage, and rosemary. A Taste of Home recipe.
Pogi loves his new toy rat.
One of my cake dreams came true today! This is an orange creamsicle version of the famous “magic cake” recipe floating out there on the interwebs!
#partyanimals #doodle #doodleofdogs #animalesdelasfiestas
May the 4th be with you.
Just enjoying Spring...
Simple small batch apple carrot muffins.
Caramel cork donuts. I can’t believe it’s been 3 three years since I made these. I used a mini popover pan to bake these donuts stuffed with caramel. Look for recipe on my blog if Interested.
Cotija cheese gougeres.
almond sesame seed cookies now on the blog!
Monday, monday...can’t trust that day.
Sitting cat.
almond sesame tea cookies.
New on the blog—cardamom coconut buns!
I think I’ve seen this movie...
Coconut Cardamom Buns! Happy Friday!! I was able to get up early and do a final bake before heading out to get dose 2. Give it to me Pfizer!! These are exactly how I wanted them, so happy!
Vanilla Cardamom Rolls, take two! This time I added coconut to the vanilla cardamom filling. Good choice, but need to use AP flour next time cuz these were almost like bagels, haha! I was hoping for a softer roll but I probably kneaded too much too. Plus a tad too long in oven. Overall I really like the outcome but maybe the third time will be the charm. ;) getting my second dose vaccine tomorrow so it may be awhile...
This recipe still needs a few tweaks because obviously the filling shouldn’t be oozing out and causing the smoke detector to go off, no! But it’s almost there!! Vanilla Cardamom Rolls with cardamom sugar topping.
Loading Comments...
Comment
×
%d bloggers like this: