I’ve probably made this close to 30 times in the last ten years! It is, of course, the same thing as a red velvet cake. It’s just that sometimes when you make something so much, you start adding your own personal touches, including what to call it. With this cake, instead of making it in two 8- or 9-inch cake pans, I use three 5- or 6-inch  cake pans, making it smaller and taller. I also use a mascarpone cheese and white chocolate frosting, powdered sugar on the top, and silver metallic dragees randomly placed around the sides of the cake. 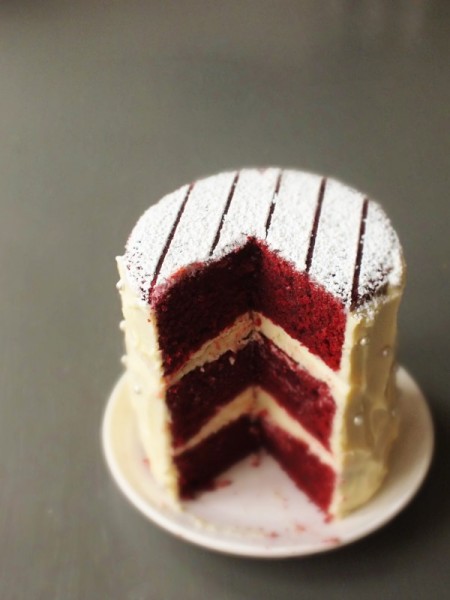 The first time I ever saw and tasted a red velvet cake, I was probably about five or six. I don’t remember what the event was. I think it was a wedding. It’s too foggy to remember that long ago, plus weddings and funerals feel about the same when you are that age. This was in the Seventies.

I remember really liking it, but then red velvet cakes seemed to be nonexistent by the time I reached my teens. Which seems odd to me, because this seems like it would’ve been a popular cake for the Eighties. Of course, maybe they were still around, and I just didn’t go to weddings or funerals much in my teens. They didn’t seem to be that popular until about 10-15 years ago. And now it seems like they are everywhere and show no signs of stopping.

I know that some countries have banned the chemical (FD&C RED 40, or Allura Red, among other names) that is used in red food coloring that you could readily buy in grocery stores in the US. I’m curious to learn what product people use to make red velvet cake in those countries, if any. Feel free to chime in if you are from one of those countries.

Red 40 Cake with Mascarpone White Chocolate Frosting (my version of red velvet cake, based on a Martha Stewart recipe)

Mascarpone White Chocolate Frosting (6/6/16 update: I added this recipe because the previous one sucked and wasn’t accurate. Mascarpone cheese is a little sensitive, so the previous recipe would’ve resulted in a frosting that broke down the cheese, separating it into a grainy texture.)

4.4 ounces of chopped up white chocolate, melted in a bain marie, and cooled, but still slightly warm

In a medium bowl, cream the butter and sugar until light and fluffy. Pour about a third of the melted white chocolate, blend, then add about a third of the mascarpone. Repeat this a couple of times, scraping down the sides as needed. Add the vanilla extract and blend on low speed again. Try not to over blend. If frosting looks too liquid, put in the fridge until it is a more spreadable consistency. Spread and frost accordingly for a layer cake.

1. Preheat oven to 350 degrees F. Butter three 5-inch diameter round cake pans (or two 9-inch round cake pans), line with parchment paper and grease and flour again. Set aside. (I sometimes just use Pam baking spray, the kind that has butter flavor and flour already in it. I also wait to spray until right before I’m going to fill the pans. Seems to work fine.)

2. Measure and sift flour, cocoa powder, and salt into a large bowl and whisk until mixed thoroughly. Set aside.

3. In another large bowl, combine oil with sugar. With hand held electric mixer, beat until mixed thoroughly. Add eggs, one at a time, blending with mixer until incorporated. Add vanilla and blend; add food coloring and blend.

5. In a small bowl, add the vinegar, then add the baking soda and stir it. It will fizz a little. Then add the baking soda/vinegar combo to the batter and blend for about 20 seconds with mixer. Add to prepared pans to about 3/4 full for each pan, and bake for 35 minutes, or until toothpick test comes out clean. If you are using three 5-inch pans, you will have extra batter to make two cupcakes. Cool on wire racks.

6. To make frosting, melt white chocolate in a bain marie (bowl over boiling water). Stir to melt and remove from heat to cool slightly.Add mascarpone to white chocolate and blend with a hand held mixer until blended. Add lemon juice and vanilla. Set aside. If it’s too hot, refrigerate for a little bit.

7. When cakes have cooled, use a serrated knife to level the top if the cakes have domed tops.

8. Add frosting on the top of one cake layer and place a second cake on top of that layer and frost the top of the second layer, followed by topping it with the third cake. You’ll want to turn the third layer upside-down, so that the bottom of that cake layer will now be the top of the cake, since it is usually smoother. Refrigerate if cake layers are slipping or if frosting between layers is bulging out the sides. If you would like to frost it as shown, leave the top unfrosted.

9. Frost the sides. I use an upward motion from the bottom, creating uneven stripes or leaves of frosting without trying to make it smooth. I finish it off by adding metalic ball dragees haphazardly around the sides of the cake.

10. For the final touch, I lie a metal baking rack (or space wooden skewers) over the cake and sprinkle powdered sugar over the top of the cake, using a sieve, then remove the rack, or skewers, to create lines on the cake top.