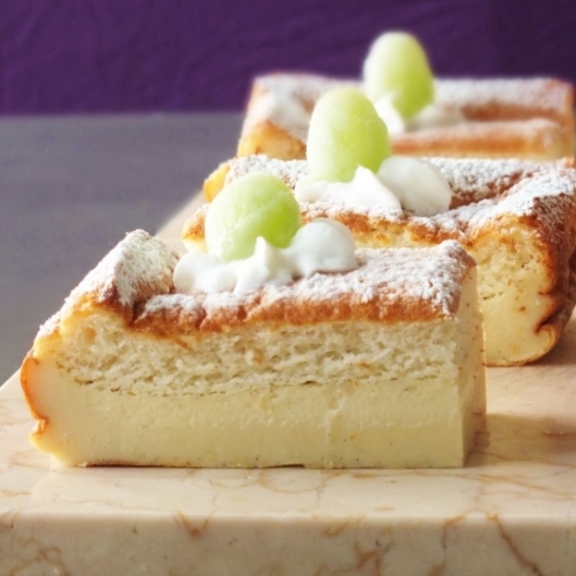 A few months ago, I ran across this recipe online, and found that there are actually different versions floating around the internet. All of them have similar names–tarta magica, pastel inteligente, smart cake, magic cake–but the idea is the same.

The cake basically is one batter that separates into three separate and distinct layers while baking. Hence the name. It’s magic. It’s a smart cake. Pastel inteligente. It is an easy recipe, and the results are impressive for the small effort involved.

The biggest factor ensuring success is that when you are beating both the egg yolks with the sugar, and later the egg whites, that you beat thoroughly, especially for the egg whites. If you beat at a medium speed, and take longer to build the egg whites to stiff peaks, the air bubbles that you incorporate into the egg whites will be smaller, and thus they will be sturdier and harder to deflate. And when you fold the egg whites into the batter, you want to fold them in gently, without deflating them, and being careful not to over-mix. 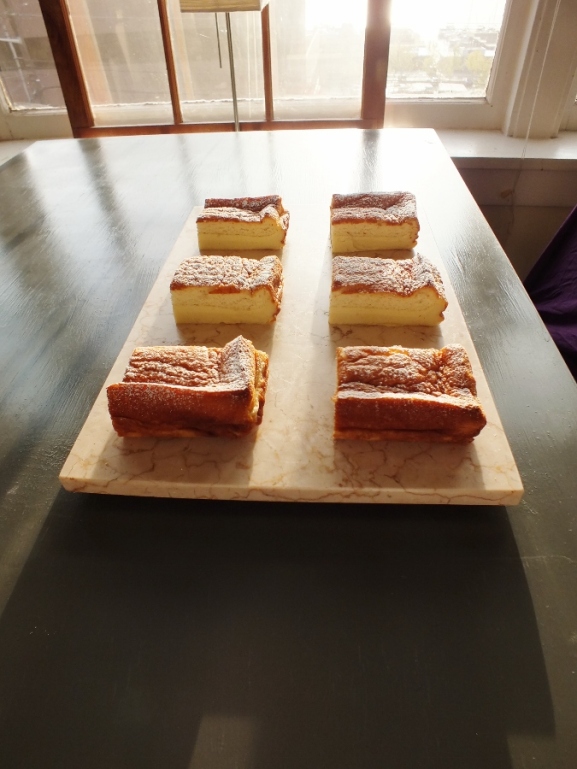 I decided to make it a half recipe, since I was going to use an 8-inch square pan, but if you make the full recipe from Kanela y Limón, use a 9 by 13 by 2 pan.

I decided to use a fresh vanilla bean, instead of extract. And although the powdered sugar sprinkled on top is adequate, I decided that some whipped cream with a sugar-frosted grape would make a nice, simple garnish on top of each slice. To frost the grape, dip each grape in egg white, let the excess egg white drip off, then roll in caster sugar. Caster sugar or superfine sugar definitely helps because the grain is finer, but use regular sugar if you can’t find caster or superfine sugar. Sometimes it’s called baker’s sugar, too. C and H now sells it as baker’s sugar. 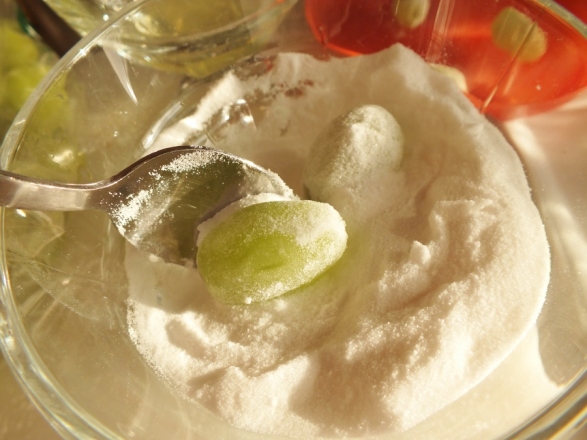 I hope you enjoy!

Smart Cake (based on a recipe from Kanela y Limon)

4 egg whites, beaten, with a few drops of vinegar, to stiff peaks

zest of half a lemon

1 vanilla bean, cut in half with seeds scraped

Starting with the yolks, add the powdered sugar and scrape vanilla bean seeds into it, then beat with a hand held mixer for about five minutes. Mixture should be very pale and thick, and when you lift the beaters, it should look like a “ribbon” folding over itself.

Add zest of lemon and mix until incorporated. Pour all of butter into the egg yolk mixture, then mix with electric hand held beater until fully incorporated and mixture starts to thicken slightly again. Gradually add in some of the warm milk, a third of it at a time, mix until incorporated, until all the milk has been added, then sift the flour over the mixture and mix on medium speed, until incorpoarated. Do not over-mix.

Wash beaters, or use another set of clean beaters, to whip up egg whites to stiff peaks when beaters are lifted from egg whites. Fold into the batter with a spatula, quickly but gently, being careful not to over-mix or deflate the whites. Pour into prepared pan and bake for ten minutes at 350 degrees F, then lower heat to 325 degrees F, without opening door, continuing to bake for 50 minutes more, or until toothpick test comes out clean.

Cool completely on wire rack, leaving it in its pan, then cover with a plastic wrap and cool in refrigerator for at least 3 hours, or overnight. Unmold and cut into equal pieces, dusting each piece with powdered or confectioner’s sugar, and then, if desired, topping each slice with some whipped cream and frosted green grape. 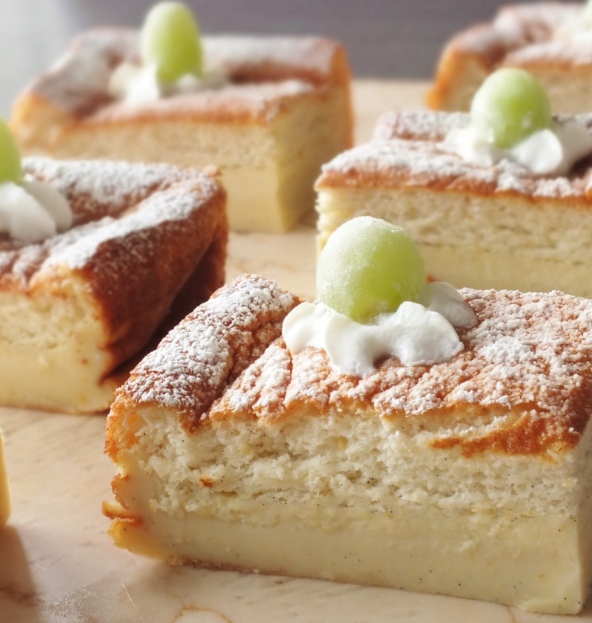