I think of this as The Chamorro cookie. It’s also spelled guguria. Initially when you try it, you may not be impressed. But they grow on you, trust me. And soon, you are consuming more than you thought you could. Of course there are other cookies from Guam, but I think if people from Guam were asked to name a cookie from Guam, it would be this. So today I thought I’d make some for my family visiting Seattle from Guam. I know. It’s the reverse of what typically happens. People from Guam often bring some guguria for their family living in the mainland US.

(It was so easy to put the dough together that I don’t even have a picture of each separate ingredient that goes into it. After forming the dough, I let it rest for about 15 minutes.)

(I pinched off marble-sized amounts before forming.) 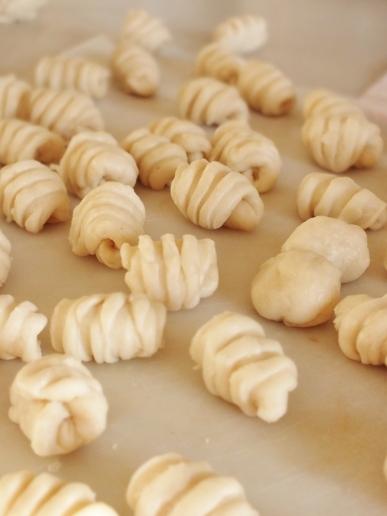 2 tablespoons of butter (the recipe didn’t specify whether it was salted or unsalted butter, so I just used unsalted butter. Use 3 tablespoons if you want the cookies to be softer. I used 3 Tablespoons, but  wished I had used 2 Tablespoons, because the ones I grew up eating were hard and crunchy. They were still very good, though. After glazing and cooling, I did put it in a warm oven(170 degrees F.) for about 3 hours, and then cooled it, and it was crunchier, but probably better to just use 2 Tablespoons if you want them to be harder.)

Mix the flour, salt and the one teaspoon of sugar together in a bowl. Cut the butter into the flour mixture as though you are making pie dough. Add the coconut milk and knead until a dough forms. Start rolling the cookies. To do this, pinch off small pieces of dough, about the size of a small marble. Pinch off a bunch of small pieces of dough that you can lay on a parchment sheet, cutting board, or baking sheet. Or just do one at a time.

Using a fork to form a cookie, press one of the small pieces of dough until it curls into a ball with the tines of the fork. It will stick to the fork somewhat, but not be too sticky that you can’t detach it from the fork.

Fry the cookies in about an inch and a half of oil in a pot until golden brown; drain well on paper towels on a plate. You can transfer it to a bowl when drained and cooled.

Prepare the syrup glaze.  In a small saucepan, add the one cup of sugar and water. Run your fingers along the bottom of the pan to make sure all the sugar is moistened.  Bring to a boil, stirring constantly until the sugar dissolves and a syrup forms. Remove syrup from the heat; allow to cool to thicken slightly. Pour the sugar syrup over the guyuria, and toss gently to incorporate. Spread on a baking sheet to let the sugar syrup dry out. Do not store until the glaze is completely dry. Store in a airtight bag or container. Enjoy! 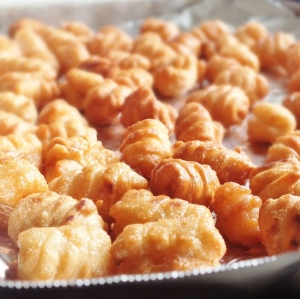