I ordered a dessert almost exactly like this, at a bar, while watching the results of the 2008 US Presidential election. When the bill came, I saw that they charged us $14 dollars for it. For one skillet cookie topped with one scoop of vanilla ice cream. Since we did not ask how much the dessert was before we ordered it, I did not protest the cost, but I never went back to that restaurant after that. It was good, but what a rip off! But ever since then, I’ve been wanting to make my own. So I did! And you can, too!

method Preheat oven to 350 degrees F. Butter two 7-inch cast iron skillets and set aside. Whisk together the first three ingredients and set aside. Cream the butter and sugars, then add egg yolk, and vanilla and blend more until incorporated. Sift flour mixture over the creamed butter mixture and blend slow and only until just incorporated. Fold in chocolate chips and nuts. Divide into two equal amounts and press each into a 7-inch skillet. Each cookie should be roughly 5 ounces each. Bake for about 14-15 minutes. Let cool slightly before topping with sundae ingredients. Or just eat plain. 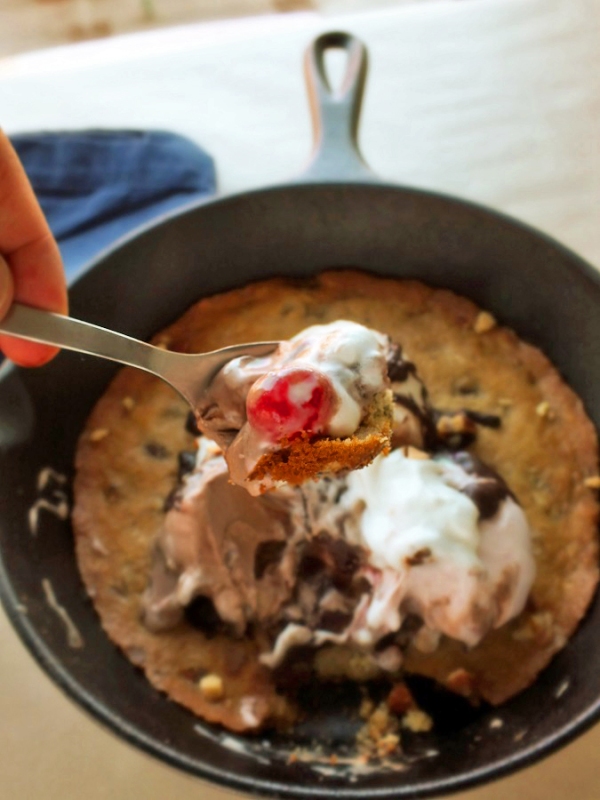