I was actually looking for some easy coffee cake recipes, not necessarily a “coffee” cake. But! As soon as I saw it, I knew I had to try it.

I was intrigued that it calls for 1 cup of coffee liqueur, which seems like a huge amount to put into a cake, and what’s more, it’s a marble cake, so half of the batter calls for it, while leaving the other part of the batter without it. How could that be? I checked the comments section to see if anyone questioned whether the amount was right, but there were only comments saying that they followed the recipe and that it turned out great.

Normally I try to put an original spin on a recipe I see to make it my own, but for some recipes, why mess with what looks like perfection? This cake has it all. It’s sturdy enough that it most likely is easy to transport. It’s moist and flavorful, and the drizzling sauce is easy to prepare and use. I really like the looks of it, and yet it’s not too complicated to whip up and prepare to be served, so I could see how it would be perfect for a potluck, picnic, or gathering. 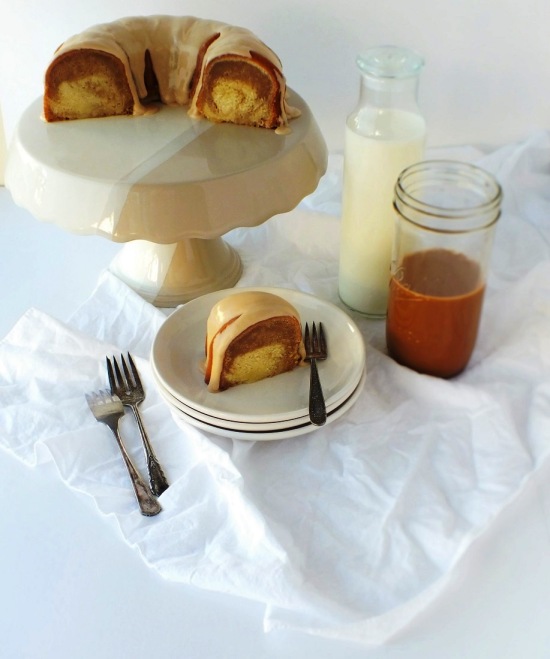 Preheat oven to 325 degrees F. Sift and stir with a whisk in a bowl the flour, salt, and baking powder. Set aside

Mix the milk and the cream in another bowl, set aside.

Divide batter in half. For the first half, add the 1 cup of Kahlua coffee liqueur, then add half of that to the base of the prepared  Bundt cake tin. Spoon the other half of the batter that contains no liqueur. Top with the remaining half of the coffee liqueur batter.

Bake for roughly one hour at 325 degrees F. Until a toothpick stuck in the deepest part of the cake comes out clean. Let cool for about 15 minutes in the pan before carefully turning out and topping with the glaze.

Whisk all the ingredients for the glaze in a small bowl. Drizzle over the cake while still hot.