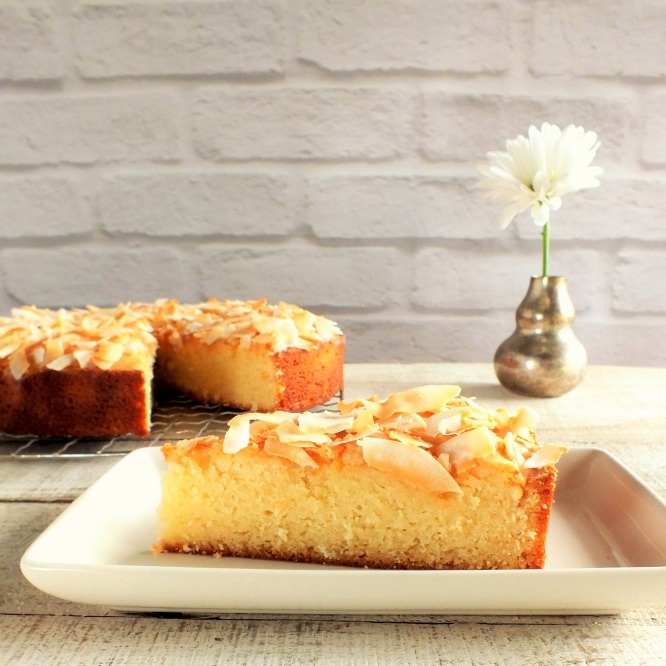 Have you heard of white chocolate mud cake?!! Not sure why it’s called that, but I heard it’s very popular as the base recipe for wedding cakes, and for other cakes that require tiers, and making it ahead of time.

It’s nice and dense, and very sturdy. This is not a cake that crumbles easily. Gotta say, I love the texture!

For me, white chocolate by itself seems a little boring and one-note. Like how some people consider vanilla to be a flavor base for ice-creams, but not a flavor to be used by itself. For some strange reason, I don’t feel that way about vanilla.

My favorite is pairing it with coconut, macadamia nuts, and pecans. And granola mix with dried fruits and nuts. Just to name a few. But I wouldn’t think of eating a white chocolate bar by itself.

To sum it up, I guess I like white chocolate for what it adds to a recipe, rather than for it’s flavor.

I almost always add melted white chocolate to cream cheese frosting, simply because it is virtually undetectable, adds just the right amount of sweetness, rather than confectioners sugar, which can sometimes be too sweet, and makes the frosting creamy and easier to pipe and work with.

Anyways, I hope you enjoy!

1 cup cream of coconut, such as Coco Lopez band

Preheat oven to 350 degrees F. Prepare a 9-inch round cake pan, or springform pan, lining the bottom and sides with parchment paper and spraying with a butter/flour baking spray. Set aside.

In a double boiler or bain marie, on medium heat, add the chopped up white chocolate and remove from heat when just melted. Let cool if it’s too hot to add eggs. You want it to be barely warm, but not too hot that it will cook the eggs.

Stir in the coconut oil and cream of coconut, vanilla, and eggs, stirring with a whisk until smooth.

In a separate bowl, sift the flours and salt and stir with a clean whisk.

Add the flour mixture in thirds while whisking until incorporated.

Pour into the prepared pan and bake for roughly 50 minutes until golden brown on top, sides starting to pull away, and toothpick in center comes out clean, or with a few crumbs, but not wet.

Remove from heat and let cool completely in the pan on a rack. Remove from pan and reinvert on rack.

Spread cream of coconut and top with toasted coconut flakes, is using.

guava cream cheese almond cookies. Only 5 ingredients and gluten free!
If you want to view paradise, simply look around and view it
Pride cookies anyone?
What’s at the top of the wall on Aurora Ave?
Let guava meringue pie take you to a tropical place in your mind.
I don’t know why I’m attracted to recipes that involve an overnight sit in the fridge, whether it be a yeast dough or a steeping, marinating, or simply a resting. An absorption? These are steel cut oatmeal scones.
#moodyshots #dogwood
Pesto Quick Bread
Pancit bihon. Recipe from Jun Belen.
Blueberry streusel bagels today on the blog!
On the blog today—strawberry flax muffins!
#birdonawire #interurbantrail #seattle #leonardcohensong #leonardcohen
Pollo pibil.
Strawberry Muffins!
Dark chocolate espresso bean chocolate chip cookies. For the coffee addict you know you are. 🍪 🍪 🍪 ☕️
I know. Thou shalt not covet thy neighbors flowers, but...dang!
I finally made King Arthur Flour Company’s Back-Of-The-Bag Oatmeal Bread, then dreamed of having it for toast with tea and jam.
Coffee bow ties.
Loading Comments...
Comment
×
%d bloggers like this: