With the advent of spring soon to be upon us in the Northern Hemisphere, we are already witnessing the burgeoning greenery around us here in the Seattle area! So I thought it would be fitting to make something that could blend in easily with the surroundings. 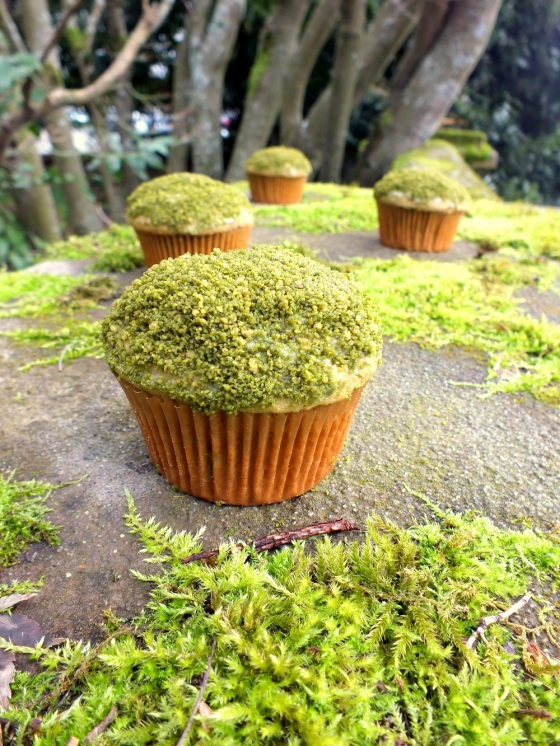 This muffin is sort of my homage to Seattle, a city also known as the Emerald City. This nickname for Seattle has been around since the 80s. There are of course other nicknames, like Rain City, Queen City, and a few others, but this one seems to be the most popular. It was the result of a contest open to the public and held by the Visitors Bureau. In addition to the numerous evergreen trees throughout the state, Seattle is also full of all kinds of other greenery that I suspect led to someone coming up with this clever and apt nickname.

So what’s in it? It’s basically a pistachio and green tea muffin with some cinnamon and citrus notes. What makes it Seattle-ish? I tried to incorporate Seattle based ingredients. I put a cup of a Starbucks double latte in the batter, and melted a white chocolate baking bar from Seattle’s own Fran’s Chocolates. And since it’s estimated that there are about 100 different kinds of moss that grows in Seattle, I thought I’d make them look like moss was growing on the muffin tops.

I must confess it wasn’t my idea to use the Matcha powder for making a moss-like topping. I found a few other baking blogs using the Matcha green tea powder as a way to achieve a mossy green color without using artificial coloring. This led to using white chocolate, since both pistachio and green tea flavors are easily drowned out by regular chocolate.

Serving it on a mossy stone fence near the Woodland Park Zoo, or on the mossy branch of a fallen tree in Discovery Park is, of course, optional, but it does make it easy to compare and contrast the moss topping with actual moss! 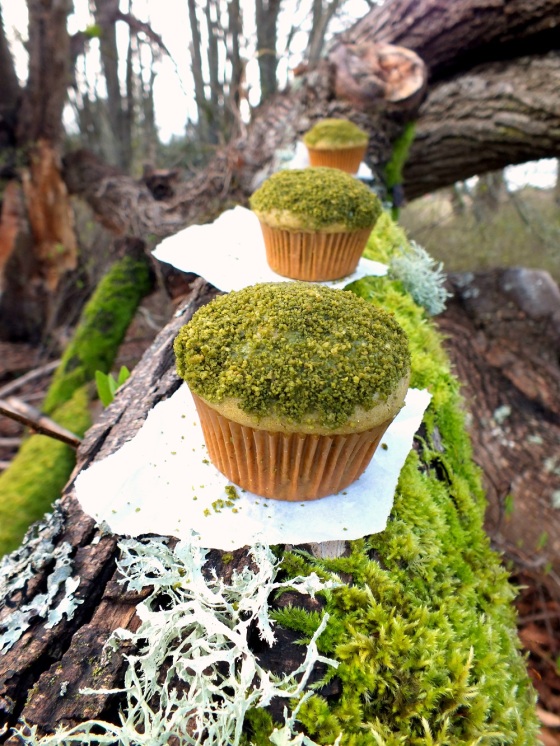 This was my first time doing food photography outdoors, and I have to admit, I was a little self conscious doing it, especially at the stone fence near the zoo because that’s also right by a bus stop where there are a fair amount of pedestrians. I also happened to have a swollen cheek from a tooth extraction I had earlier that day. Plus, there are just some actions that people do while taking food photos, like holding up a crumpled piece of paper to the food, that may look odd to the casual observer. I was suddenly aware that there were a few eyes watching me obsess over what looks like little globs of moss on a fence. I felt like people thought I was trying to perform for them. Overall, it was a positive experience, but I still prefer taking photos at home without the feeling like I’m putting on a show. But the weather cooperated, and Seattle was her usual cloudy and overcast self, which helped diffuse the light beautifully.

2 cups whole shelled pistachios. This was from a 16 ounce bag of pistachio nuts with shells.

3/4 cup sugar (decrease to 1/2 or less if using commercially prepared pistachio paste, and omit the 2 Tablespoons of water)

zest of one lemon

Grease 13 muffin tins or line with paper liners. If you only have a tray for 12, just use a separate cup or stand-alone liner. This 13th muffin will be crumbled up later for the topping, so it doesn’t need to look  like the others. Just make sure it has cooled sufficiently before crumbling for the topping, otherwise if it is still hot, it might turn the topping into a paste!

Transfer 1 cup of this into a food professor and reserve the rest (less than a cup) for the topping later. Add the 3/4 cup sugar and couple of tablespoons of water. Pulse or mix briefly on high until the water makes it more pasty.

Transfer this pistachio paste into a medium bowl. (You can also sub. with 1 cup (11 ounces) store-bought commercially prepared pistachio paste–if you do, omit mixing in sugar and water beforehand, and also decrease sugar to 1/2–but you’ll still need to grind up some pistachio nuts for the moss topping.)

In the bowl with the pistachio paste, (add 1/2 cup sugar here if using store bought pistachio paste and don’t add water), butter, oil and blend with an electric hand-held mixer with beaters on medium speed, until fairly well mixed and smooth and fluffy.

Continue with the mixer on medium, adding the eggs, one at a time, until blended into the batter.

Add the extract, if using, and the zest of one lemon, and mix again.

Stop the beater and scrape down sides and bottom of bowl as needed.

Add the double short latte (about 3/4 cup)  and continue to beat until well mixed.

Spoon the batter into the prepared tins and bake for 20-24 minutes until tops are domed and do not look soft or wet in the middle. A toothpick stuck in the middle of one of the center muffins should come out clean.

Remove from oven and cool on wire racks.

Melt the Fran’s chocolate by using a bain marie, or heating it incrementally several seconds at a time in a bowl in a microwave. Set aside.

For moss topping, place one of the muffins with the  reserved ground pistachios into a food processor, plus 1 teaspoon of Matcha green tea powder, and 2 teaspoons of confectioners sugar. Pulse several times until all is broken down into a uniform, crumbly mixture resembling moss. Transfer to a small bowl.

Tap or shake muffins gently to remove excess, then use a clean finger or pastry brush to spread clumped areas of moss to areas where there is just white chocolate.

To serve, go out and arrange muffins on a mossy stone fence or branch of a fallen tree. Kidding.