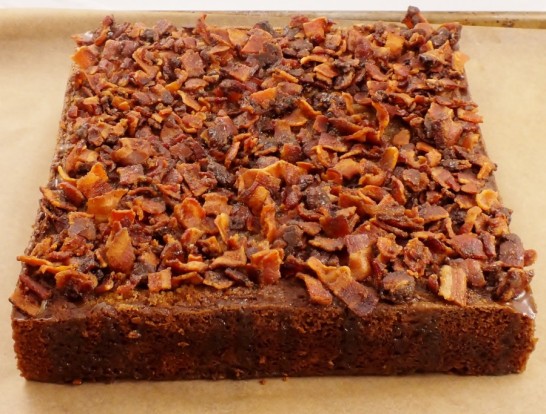 I know putting bacon in sweet things isn’t anything new, but since making the chocolate whiskey bacon crunch cake, I thought it was time for  simpler dessert with bacon. There are a lot of examples on the internet of some good cake with bacon in it; some have bacon in the cake or in the frosting, others have sort of a bacon streusel topping. I was hoping for something that was moist, but didn’t want to put the bacon inside the cake, or with too many other moist things that might make the bacon soggy or less crispy. I think this recipe solves that problem by making candied bacon and putting it on top of the finished cake. I hope you enjoy! 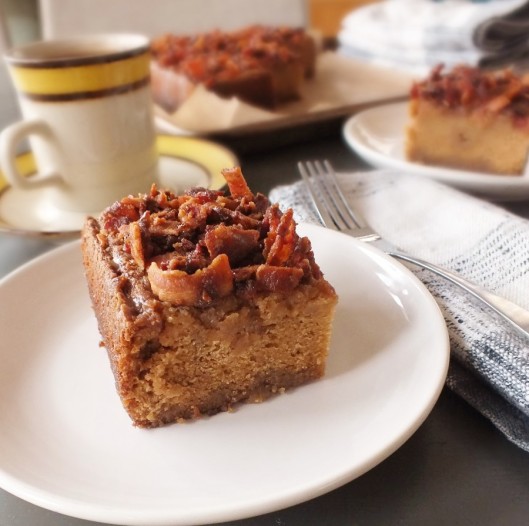 3. Preheat the oven to 350 degrees F. Grease a 9-inch by 9-inch square pan, line the bottom with parchment paper, and grease parchment paper again or spray with baking spray (butter flavored oil and flour). I didn’t flour the sides, and it didn’t seem to matter because the cake didn’t stick to the sides much; in fact, when it was done it pushed away from the sides a little.

5. With hand held electric mixer, cream butter and sugar, then add eggs, one at a time, beating after each egg to incorporate before adding another egg. Add vanilla extract and beat again to incorporate. Scrape down the sides of the bowl with a spatula as needed.

6. In a small sauce pan, heat the water and maple syrup until boiling. Remove from heat once it is very hot be hot, but not boiling. Cool somewhat before using.

8. Pour batter into prepared pan and place in middle rack in oven. Bake for about 45-50 minutes, or until toothpick test comes out clean. Remove from oven and let sit in the pan on a rack for about 10 minutes before removing from pan. Place cake on rack over a clean, rimmed baking sheet lined with aluminum foil or parchment paper.

9. With a fork or skewer, punch holes over the surface of the cake to increase absorption of maple caramel sauce. If the cake has a dome on top, use a serrated knife to level the surface. Eat the scraps, or save for later.

10. Slowly pour the maple caramel sauce over the cake, allowing it to drip down the sides, as well as into, the cake. You may wish to put about half at a time. You can scoop up sauce on the baking sheet to put back on the top. Cake should be able to absorb all the sauce.

11. When cake has sufficiently absorbed all of the maple caramel sauce, top with the candied bacon bits. Serve with coffee, or milk, add dollop of whipped cream, or vanilla ice cream–however way you’d like to serve it, really. I had it as part of my nutritious (read calorically excessive!) breakfast this morning. Time to workout! 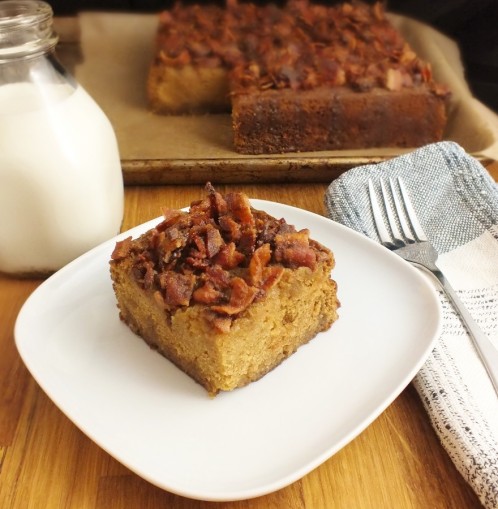 Fry bacon as you would on a stove top, using a skillet or pan, placing bacon on a plate lined with a paper towel, bu perhaps taking it out just slightly under the time you’d normally take it out. You don’t want it raw, but you don’t want to burn it, as you will be baking it with sugar in a moment. Reserve 1 tablespoon of the bacon grease, for the maple bacon sauce, (if desired). Let cool until it can be handled. Cut into roughly 1/2 inch squares. Place bacon squares in a bowl and mix the bacon with about 1/4 cup of brown sugar. Place sugared bacon on a baking sheet lined with aluminum foil. Baked on 350 degrees F, for about 10 minutes, or until slightly caramelized, being careful not to burn sugar. Use for topping the cake.

In a large heavy-bottom saucepan, combine the cream, butter, brown sugar and maple syrup, plus optional bacon grease and salt, if desired. Bring to a boil over high heat, whisking frequently. Once the mixture comes to a boil, remove from heat. Set aside. If sauce clumps after sitting, whisk again and strain in a sieve to remove clumps. 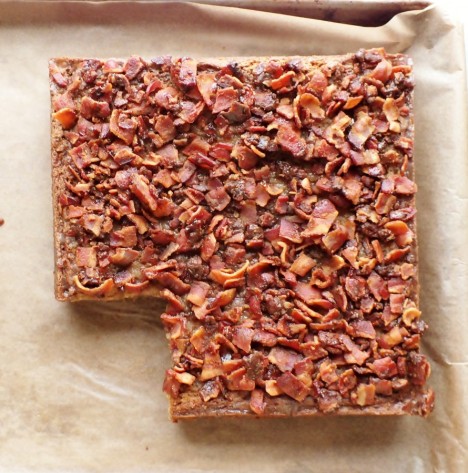