My new silicone canelé molds are no longer new. I bought them online, and they’ve been waiting to be used for two years now. Is it sacrilege to make canelés in other flavors besides vanilla custard? I looked around online and do see a few other flavors, (and even things that were only canelé in shape–the molds can be used for gelatin-based desserts), so I decided to try making my own version–guava and cheese! Why not?

I initially thought of using gorgonzola, but was too lazy to go to the store just for a stinking cheese, so I decided to use whatever cheese we happened to have on hand already–queso fresco it is! In retrospect, a stronger flavored cheese would’ve worked nicely, because for this, I could barely taste it. I think goat cheese would be excellent, IMO.

Full disclosure: This is NOT a traditional canelé recipe, nor is it based on one. I know there may be a few different recipes, but there is a very basic recipe, and technique, from which most recipes are based on. The only thing I knew that may be similar to the basic recipe, is that the batter I used is fairly thin in that you can pour it into the molds. I did not use hot beeswax to coat the molds, because the silicone ones supposedly work well without it, and also the temperature I used was lower than a traditional canelé. 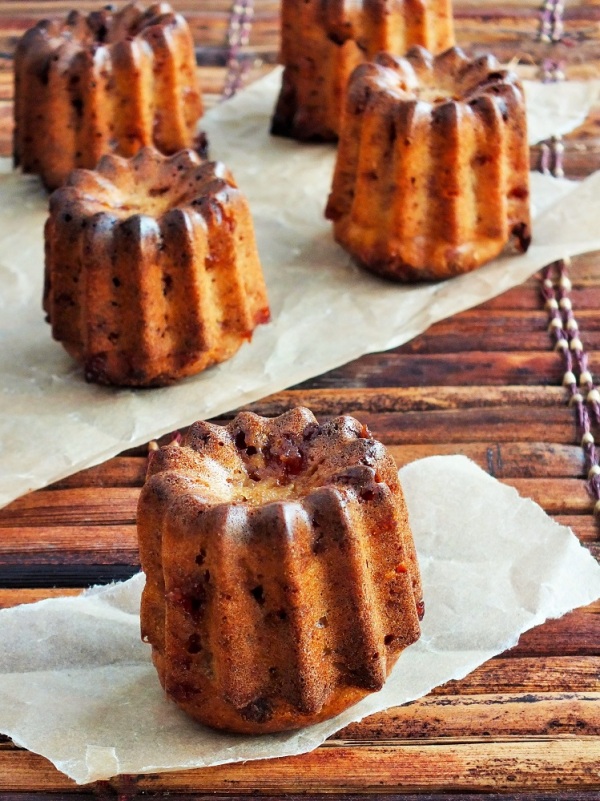 I really had nothing to lose. I thought that if it didn’t work, I could put my silicon canelé molds back in storage to collect more dust.

I knew that I needed to grate the guava paste, or cut it into very small pieces. I also knew that I needed to dredge the guava paste in something to keep it from sticking together and getting all gloopy. (<—I took the larger pieces of guava pictured here, and broke them up to smaller pieces and dredged them again in confectioner’s sugar to ensure that they would not cause problems, like stick to the sides of the mold and cause difficulty with unmolding.)

I decided to use confectioner’s sugar. Fingers were crossed. I felt that the worst thing that could happen is that I would waste about 8 ounces of guava paste, and that I’d have to soak the canelé molds to loosen all the burned guava paste, cheese, and eggs. Luckily, that didn’t happen! And the result was better than I expected. It was, like the traditional canelé, crunchy on the outside, and soft and custard-like on the inside, only guava and cheese flavored instead of vanilla.

8.5 ounces guava paste, which, when grated coarsely, is about 1.5 cups

You will need 2 canelé silicon mold pans, 6 molds per pan. If you don’t have that, you can use a 24-count mini cupcake mold pan instead, but they will be mini cupcakes, and you won’t need to bake them for an hour. Maybe about 20 minutes on 350 degrees F. You will also need a sifter.

Preheat oven with a baking sheet in the middle rack to 390 degrees F.

In a medium sauce pan, heat the milk and butter until the butter just melts and the milk is almost going to boil. Add the flour and salt and stir with a rubber spatula. Add the eggs, one at a time, and using the spatula to incorporate thoroughly without over mixing. Add the guava paste and cheese and stir again several times to incorporate. (I didn’t want to use a whisk, because that might incorporate too much air bubbles into the batter, which I didn’t want. I may have incorporated too much air into it anyway. Perhaps letting it sit in fridge before using?) Divide evenly into 12 canelé molds. Add about 2 Tablespoons per mold. Each mold will be almost filled to the tops, (about 1/3 of an inch from the top).

Place on tray and bake for about 55 minute to an hour. Cool on a wire rack for about 10 minutes. As delicately as you can, try to get the cakes to come out of the mold. Resist the urge to squeeze the molds, because that could bent and deform the canelés. I soaked the bottoms briefly in ice water, just so I wouldn’t have to handle the molds with a bulky towel or kitchen mitt. I also gently tapped the tops, and also tried to loosen any edges that stuck to the molds with a small knife.