Being that today is both International Peace Day and National Pecan Cookie Day, this was pretty much an inevitability that I repost, even though I made these back in July!

Actually, peace was the farthest thing from my mind yesterday, what with all the ongoing news of horrible events and injustices in our country and world. But at the risk of sounding like a beauty contestant, peace starts within ourselves. Meaning we need to first have inner peace before we can expect and cultivate peace in our communities and in the world. And I don’t mean that we should view the world with rose-colored glasses or be like an ostrich with one’s head in the sand, but that I think we first must have the experience of being at peace within ourselves in order to approach problems with peace in our hearts for our fellow human beings. Okay, I’ll stop now.

Sorry for being withdrawn and uninspired, visitors and fellow food bloggers. Life felt overwhelming these last few weeks. Not all of it bad. The world and US national news definitely felt overwhelming, and still feels overwhelming, but my personal life has been relatively good.

Ben and I have been adjusting to the new permanent resident status. It’s been good. But I just have not felt like posting or even looking at food, and for that I apologize. I know that you all have been making some great stuff, and for fellow food bloggers I’m eager to get back to visiting and seeing what you’ve been up to.

Of course, because everything’s already been done, I did do an internet search and found that “World Peace Cookies” already exists. I hope Dorie Greenspan and Pierre Hermé don’t mind. These are not based on that recipe. I think those are sablé, which are French butter cookies. Which look really good and I’ll have to try making those someday too! These are coconut oil-based, with all the ingredients that make me happy and peaceful. 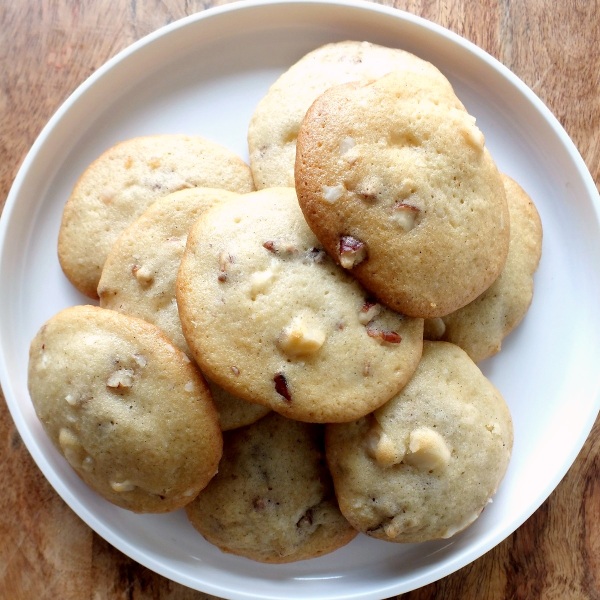 Truth be told, I’ve been wanting to make something to post here with a name that inspires. Also with a name that bridges the disconnect between the real world and this fantasy baking world I’ve created. The long ingredient content-based name was just an excuse to rename it ‘Peace Cookies’. I feel that food should do more than just nourish or be appetizing. Creating something to eat while with the best of intentions for the world can help process and heal from the suffering and injustices in the world that we hear about in the news. And to be grateful for what we have. Even if it’s just a dang cookie recipe! We can start with small things that inspire us to do and be more! So I hope you are motivated to give this recipe a try, or to inspire you to find your own Peace recipe. 🙂

I initially tinkered with a cake recipe to make bars last week that were similar, but they turned out more like cake than I wanted, even though a few people at work said they really liked them. Also for the bar version, I didn’t cut the macadamia nuts at all, which made it difficult to cut bars into neat little squares, so here I decided to chop them into little pieces similar to the chopped pecans.

I also decided to go ahead and just make them cookies. I initially didn’t add cardamom, but since I had some already processed, I might as well use it before it got stale. I’m really glad I did because it goes very well with coconut flavor, I think. I’ve already had about 6 cookies with my morning coffee as I write this! I was going to make a frosting, but they are already plenty sweet. Really glad I added the full teaspoon of salt, because I feel it brings the nut flavor of the macadamia and pecans, and complements the sweet from the coco lopez and the white chocolate.

Sift and whisk together in a bowl the flour, baking powder, baking soda salt, and cardamom. Set aside.

In a medium bowl, cream the coconut oil with the sugar until combined. Add the eggs, one at a time, then the coconut extract, blending separately after each addition with a hand held mixer with beaters on.

In a small bowl, combine the cream of coconut with the rum and stir until incorporated.

Add about half the flour mixture to the creamed coconut oil/sugar mixture, followed by mixing, then adding the cream of coconut/rum mixture, then the second half of the flour mixture and mixing until combined. Add the white chocolate chips and nuts and fold into the dough until well integrated.

You can at this point cover with plastic and place in the refrigerator later or the next day, or you can scoop tablespoon-sized portions and space at least 2 inches apart on the prepared baking sheets. I tried both baking right away versus letting them sit in the fridge, and the differences are minimal. The ones baked right away last night, all two of them, were quickly devoured. They were slightly flatter, but had almost the same texture and mouthfeel. The ones that rested were a little taller, and took slightly longer to bake. I baked the ones that sat overnight for about 12-15 minutes, at 350 degrees F., whereas the ones baked immediately after making the dough were baked for about 10 minutes, also at 350 degrees F.