This Independence Day, I thought I’d do my own take on Watergate Cake, which was first made popular in the mid-1970s, when instant cake mixes and artificial food colorings were all the rage. It was a popular cake to bring to potlucks and barbeques. The original called for a box of instant white cake mix and adding a box of pistachio instant pudding mix and a cup of soda pop to the batter. I’m not sure how the cake is really associated with Nixon or Watergate, other than this was a popular cake during that period of our nation’s history. 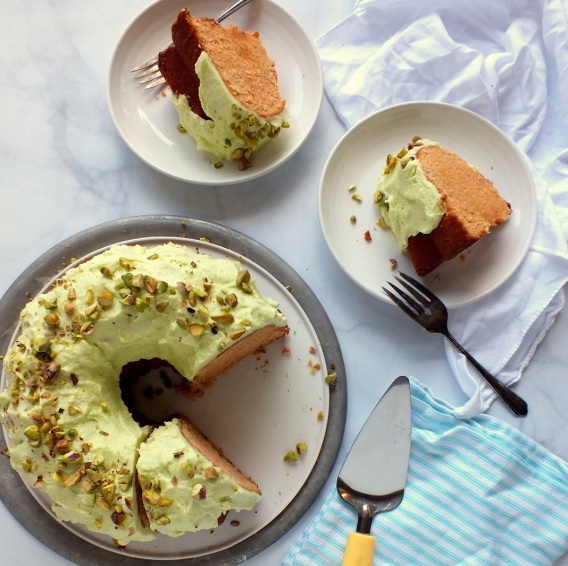 Given that we are now in a similar situation politically with a POTUS fraught with scandal and facing possible impeachment, I thought I’d update a cake for our times. Instead of boxes of instant pudding and cake mixes, I decided instead to make an orange bundt cake utilizing orange soda for the leavening and to add ground pistachios with the flour. It utilizes Crisco shortening, 3 cups of sugar, salted butter, and food coloring added to the already artificially bright orange soda.

I debated whether a cake representing a narcissistic circus peanut should even be edible. But in the end, I decided to keep it edible, even slightly delicious, but overall just not good for you, health-wise. Oh, what memorable times we live in, don’t we? I don’t think we will look back fondly on these times, but I’m sure they’ll be quite memorable. Still, it was cathartic for me to make this cake. Plus, I imagine this makes a good cake for a potluck or barbeque. Happy 4th of July!

1 drop each of green and yellow food color, optional

Prepare a 12 cup Bundt pan by greasing and flouring, tapping out excess, or using a baking spray with butter and flour.

Sift the flour and ground pistachios together into a bowl and whisk. Add the orange zest and whisk to disperse the zest evenly throughout the flour mix.

In another bowl, using a hand held electric mixer, cream the butter, shortening, and sugar until fluffy. Add eggs, one at a time, beating well after each, scraping the sides and bottom of the bowl with a rubber spatula as needed.

Add the extracts and mix again.

Add food coloring to the soda and stir gently.

Pour into the prepared pan and bake for an hour and 10 minutes. Ovens vary, so start checking at the one hour mark. Toothpick test should come out clean at the thickest part of cake.

For frosting, simply beat butter until fluffy, then slowly add the rest of the ingredients, except the chopped pistachios, while continuing to beat, until fluffy and spreadable.

Spread over the top and some of the sides of the cake. Garnish with chopped pistachios.