Since last year’s Russiagate Cake with Impeachment Frosting went over so well, for this year’s Independence Day, I decided to continue with an impeachment theme. I call these imp cakes, because they are just a tad smaller than the size of standard cupcakes. I decided to make my imp cakes of the peach-mint variety. Get it? Imp (peach mint) cakes! Okay, kind of a stretch, I know. But I don’t care. Because to protest is patriotic. And this is my form of protest. A form of political cake. It was cathartic to make these.

I decided to place them on a Texas-shaped mylar “blanket” to represent the human rights violations against children and families currently happening on the southern US border, and how government officials from the President on down are trying to convince us that somehow they’ve committed such grave crimes against us by daring to cross into our border, but that we are actually  taking good care of the children by wrapping them in mylar blankets as they lie on green sleeping pads wondering when or if they’ll ever see their mothers or fathers again.

Migrant children, some of them infants, are literally being ripped from their parents arms and placed in cages with nothing more than a few mats and mylar blankets to stay warm. That is not hyperbole, that is actually what is happening on our southern border. And our garbage president is trying to convince us that somehow they deserve what is happening to them.

After the government was caught in a lie telling us that this is nothing new, that the Obama administration did the exact same thing, Trump signed an executive order that basically negated the new policy of family separation at the border that they had started. It did nothing to ensure family reunification for those already separated, and it might mean that families will be detained indefinitely. All for the crime of not properly going to an established point of entry on the US border when seeking asylum. (Which is hardly a crime, by the way.) The administration also tells us these are despicable creatures that are trying to “infest” our good country, or perhaps to join MS-13 so they can do even more harm to us! But we know better.

Since last month, I’ve been watching the news every night after work, and have been getting more and more depressed with the events specifically at the US southern border. As the husband of a formerly undocumented immigrant, this issue hits home for us. Immigrant rights are human rights. People largely do not come here to join MS-13, or to commit crimes; they come here most often to escape poverty and violence. They are also statistically less likely to commit crimes than US citizens. But this current occupant of the White House would like you to believe otherwise, and that we need to build a great big wall to keep them out.

We cannot as a country be about separating children and babies from their parents in the name of national security. Period. This doesn’t make us safer as a country.

Never have I been more embarrassed for my country. We’ve failed. But please let us right the wrongs. Starting with getting rid of Trumpty Dumpty and his stupid wall idea, his division and fear tactics, his xenophobic twitter rants, adulterous and misogynistic tendencies, and his basically rewarding the rich to the detriment of everyone else.

My hope is that by baking these impeachment cakes, the idea of impeachment will be planted into the hearts and minds of Congress. My hope is that the results of the mid-term elections will flip enough seats in the House and Senate from Republican to Democrat, which will then make impeachment more of a possibility. ITMFA!

This recipe was inspired by a Rachel Ray recipe for Strawberry Jam Cake, only I modified it slightly, swapping peach jam for the strawberry jam and adding peach schnapps to augment the peach flavor while still having a hint of the buttermilk. They are surprisingly easy to make, and very tender with good peach flavor.

The mint frosting is a simple buttercream recipe, but with finely crushed Altoids in it. I got that idea from Matt Lewis & Renato Poliafito in Baked: New Frontiers in Baking, only instead of a mortar and pestle, I used my coffee grinder and a sieve to pulverize the altoids. Which turned out to be a good thing, because the remnants of crushed mint in the grinder flavored my morning cup of joe for the past few days! I normally don’t like flavored coffees, but it turns out I do like Altoid-flavored coffee!

If this post has left you wondering how you might be able to help in some way, click here on how to help immigrant children and families separated at the border. 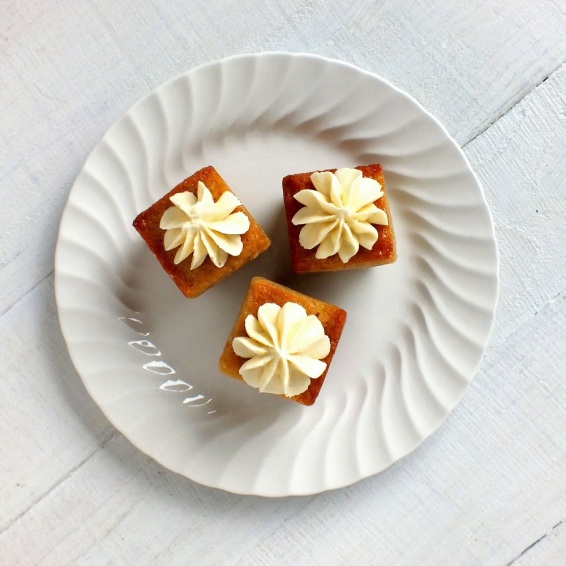 For the white chocolate mint buttercream:

1/2 a package of Altoids, (about 45 individual candies, or 1 ounce), finely ground in a coffee grinder

Sift the flour, baking soda, and salt into a bowl and stir with a whisk several times. Set aside.

In a medium bowl, combine the lemon juice and milk and let side for about 5 minutes. Set aside.

Cream the butter and sugar with an electric hand-held beater until light and fluffy. Add the eggs, one at a time, until incorporated into the batter.

Add the peach schnapps and peach jam to the lemon/milk mixture and blend with the beaters until combined thoroughly.

Starting and ending with the flour mixture, and alternating with the peach schnapps mixture, add a little of each to the creamed butter and egg mixture, mixing with the beaters on low, and scraping down the sides and bottom of bowl as needed.

Add three tablespoons to each 2-inch cube mold. Gently hit the mold trays on the counter to level the top surfaces of batter in each mold.

Bake at 325 degrees F. for about 35-40 minutes until tops are dry and slightly golden brown. Let restin molds for 15 minutes before carefully inverting and turning over right side up to rest on wire racks until cooled completely before frosting.

To make the buttercream frosting, melt the white chocolate in a bain marie, or microwave, just until melted. Cool slightly before using.

Cream the butter and confectioners sugar until fluffy, then gradually add the white chocolate in increments. If butter starts to melt too much, stop and temporarily place bowl in the fridge until butter is more solid, but still soft, about 5-10 minutes.

Continue to blend in the white chocolate to the creamed butter/sugar mix, until smooth and creamy, then add the crushed altoids and blend more. For this recipe, I piped the frosting using a simple star tip, but feel free to frost each cake any way you see fit.

This recipe still needs a few tweaks because obviously the filling shouldn’t be oozing out and causing the smoke detector to go off, no! But it’s almost there!! Vanilla Cardamom Rolls with cardamom sugar topping.
Mask madness. Can you guess which one was my first mask?
You gotta stop and smell or at least admire the flowers.
Potato and cheese taquitos with salsa verde and crema.
Clementine Almond Cake on the blog today!
Oh My Darlin Clementine Almond Cake.
Veracruz, Mx.
Cheap DIY tempera paint background.
Old-fashioned no-knead English muffins. A serious eats recipe. seriously good.
Fun with fonts for my imaginary book. There really should be a Wes Anderson font.
How to Pose in the Boudoir by Pogi
Chocolate Raspberry Layer Cake! On the blog today! I wanted a make an elliptically cylindrical cake. So I bought 3cans of sardines just to use the cans for baking the cake layers. Now I have about 3 pounds of sardines in my fridge! Oh well, at least it’s already cooked! 🤣😂🤣😅
Coffee Black Walnut Pound Cake with coffee black walnut glaze. A pungent, sturdy cake!
If you bake with love, you can’t go wrong. I don’t know if that’s always true, but I always try to have love and respect for ingredients. This is a coffee black walnut pound cake. I used black walnuts, black walnut oil, lard, butter, and some strong coffee for the glaze, among other ingredes. On the blog real soon!
Ever since Easter I’ve been eating Molletes in one form or another! They are often eaten for breakfast in Mexico, but we had it for dinner once and snacks on other days. It’s basically a slice of bread with retried beans, melted cheese and pico de gallo, toasted. I even made my own bolillo bread I was so obsessed. We are finally done with all the ingredients, lol.
Air fryer apple fritters.
Just hanging out with fishie. Fish Friday! I can’t figure out how after months of ignoring fishie, suddenly it’s a fun toy to have and hang out with?! But whatevs, Pogi. 😂
Colomba di Pasqua, now on the blog! Recipe link in bio.
Loading Comments...
Comment
×
<span>%d</span> bloggers like this: