June is considered Pride month for the LGBT community, and so I decided to bend the rules here a little and have another post for June. As a member of that community, I thought I’d make cookies that differed from the usual rainbow colors of the pride flag. (Because even we get tired of the same old color schemes!)

Plus, I don’t feel that unicorns are as heavily used as a symbol in the LGBT community as the pride flag (I could be wrong). I mean, if you like the pride flag, more power to you. I like these because…less artificial coloring. What you do use here is a natural source, at least for the color. I made pride cookies once that were little pride flags, and while they were impressive, had quite a bit of artificial coloring per cookie, and that really impacted the flavor.

I’m not sure why the symbol of the unicorn is popular among LGBT folk, other than it is often associated with rainbows, and since the rainbow is associated with the LGBT community, by extension, so is the unicorn. But the unicorn can also be a symbol of one’s individuality and for some, gender fluidity. For others, it may be a symbol of self-acceptance and commitment to authenticity. I’ve read a ton of other things about the unicorn symbol, but I think that in the end, the reason for its wide appeal among all different kinds of people is that it symbolizes hope and positivity. Which are important, especially during these dark times. 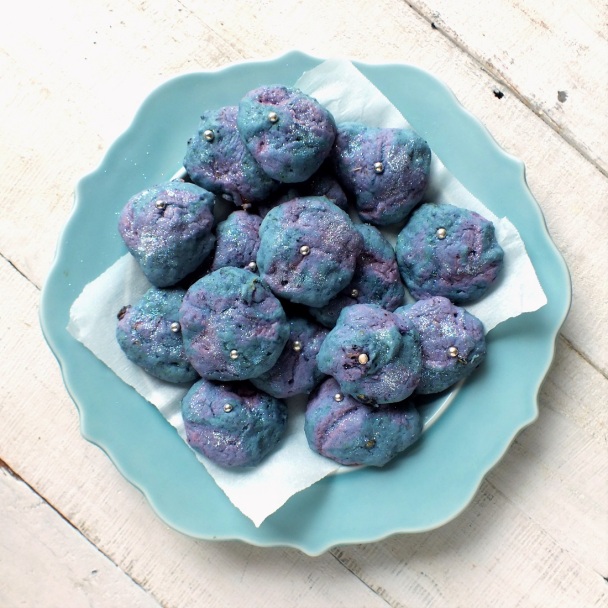 These dried butterfly pea flowers do not impact the flavor at all. In fact, I ate a whole dried flower before making these, and didn’t taste anything, so I think they are mainly used for their color. I don’t even remember where I first saw them online, but I’m impressed by their properties and applications. These are most popularly used in Thai and Balinese dishes and desserts. 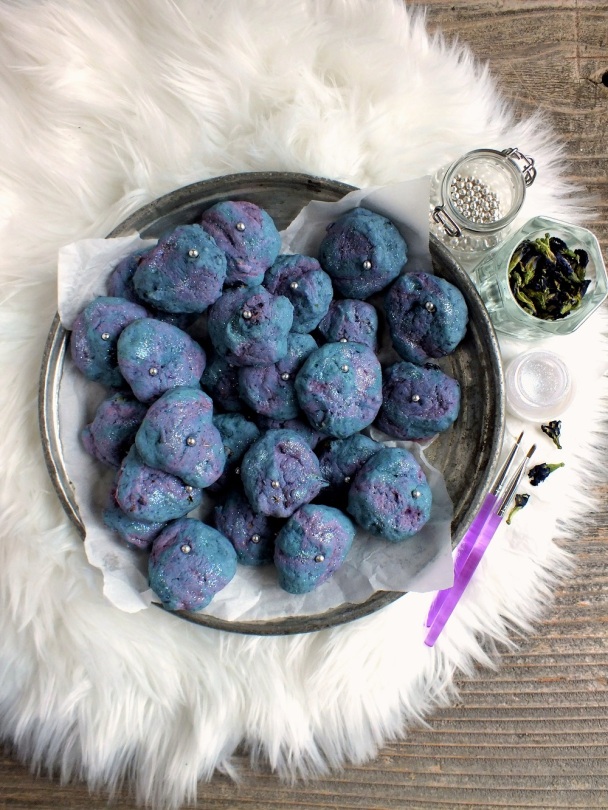 Dried butterfly pea flowers can turn hot water or milk into an incredible blue color, in a matter of minutes without leaving any aftertaste! Plus the color can further change from blue to purple to pink, depending on the acidity added from other ingredients. 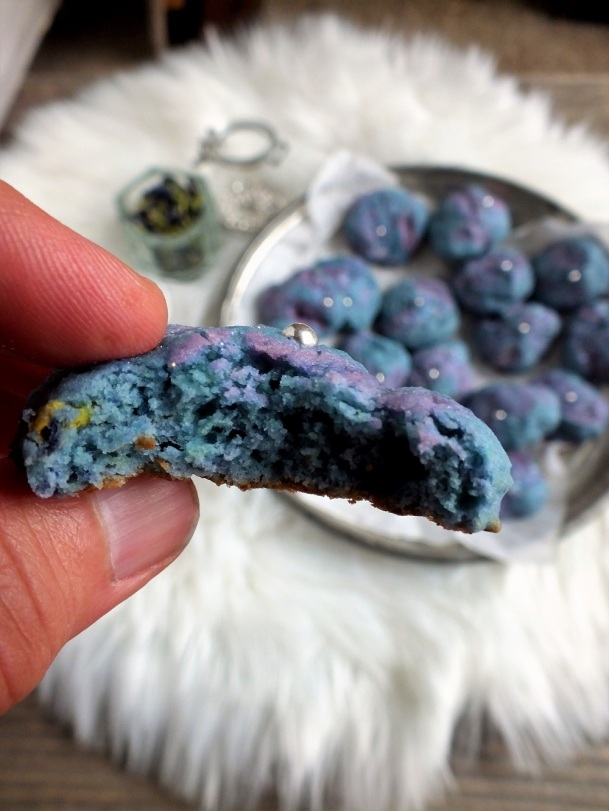 I was going to call these Galaxy Glue Cookies, just because that song from the movie, The Incredible Shrinking Woman, is forever stuck in my head, thanks to being an 80’s latchkey kid with access to a VCR! But I think Unicorn Cookies sound much more appetizing, don’t you think? Oh, and by the way, the faux fur seat cover in the above photo is supposed to represent the mane of a unicorn. Ben was questioning why I used it for my photos, so I thought that I might explain it to you, in case you were wondering the same thing! I was tempted to brush the mane with some of the rainbow disco glitter dust, but since I use it as my seat cushion at work, I didn’t want to end up with glitter butt!

Happy Pride, wherever and whoever you are!

30 or so small silver dragées, one for each cookie

Pour milk into a small saucepan over medium heat and add the coarsely chopped butterfly pea flowers. Remove from heat when milk is very hot and just about to start boiling. Let steep for about  minutes. If you do not want little specks of dried flower in each cookie, strain it out of the milk and discard the chopped flowers in the compost. I like it in the cookies, it doesn’t have much flavor, I just make sure I finely chop it to avoid having large clumps.

Cream the butter and sugar until fluffy and light. Add the vanilla extract and the egg and beat until well mixed.

Add about a third of the flour mixture to the butter mixture and beat until all flour is wet.

Add about half of the milk/butterfly pea flower mixture and mix until incorporated into mixture.

Add half of the remaining flour and mix again.

Add all of the milk/butterfly pea flower mixture and mix.

Add the remaining flour mixture and blend until all is moistened

With a clean finger, or with a small utensil or knife, slightly flatten the tops of the cookies by first making a circular motion starting from the middle of the top of the cookie, swirling clockwise and outward. Create some crevices and texture to allow lemon juice to pool unevenly.

With a small teaspoon, add a several drops of lemon juice in different areas of each top of cookie, allowing it to spill randomly around and sides of cookie.

Top each cookie with one silver dragée. You can also wait until after baking, but you’ll want to put them on as soon as they are out of oven before they cool.

Bake for about 9-11 minutes, cookie will rise just slightly. I like them baked but not yet browned on the edges. The tops will not be as shiny as they were before going into the oven.

Remove from oven and leave cookies to rest on sheets for about 2-3 minutes before transferring to a wire rack.