Growing up in Guam for me meant simultaneously being aware of American food and culture via the TV, and being detached from it. This is not a complaint, just an observation. Plus, we were latchkey kids in the 70s and 80s, so I’m sure that we saw biscuits a lot more on TV than in real life! While being aware that biscuits were kind of a southern thing (meaning that it was from the southeastern US states, mainly), we never got used to biscuits being any one way. We never got used to biscuits, period.

We even had Bisquick (the box mix from Betty Crocker) most of the time in our kitchen, but for some reason we mostly used it for making pancakes, and once in a while for breading in fried foods. I’m not sure why we never made what Bisquick was most intended for–biscuits. And although we did eat an occasional biscuit from McDonald’s when they started offering breakfast sandwiches, or at KFC, where they sold biscuits as one of many possible side orders, we much preferred other types of carbs. Biscuits were just not that popular in Guam. Rice was often our carb of choice. That’s why I’m a big meat and rice fan! 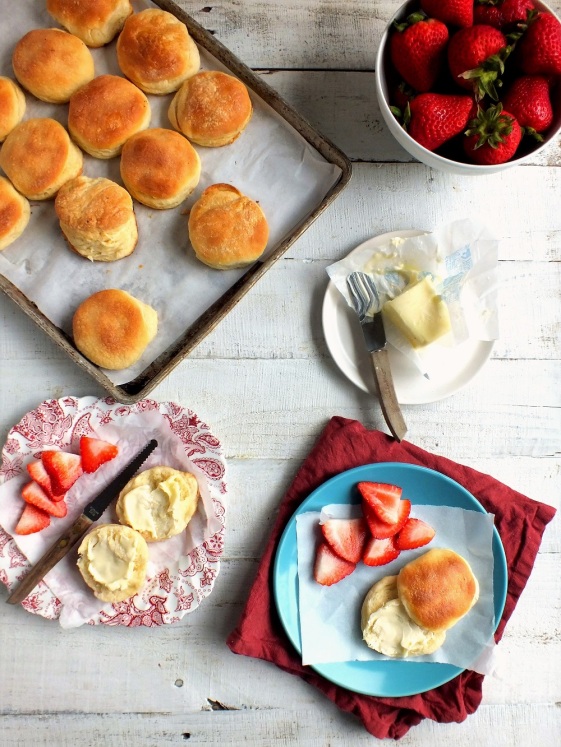 When I moved to the US mainland as an adult, I did end up finally making biscuits from scratch a few times, and up until about a month ago, never questioned why biscuit recipes always seem to be heavily leavened by chemicals only, and why there didn’t seem to be any yeast-only recipes out there.

Recently I came across a recipe used in Mexico for biscuits (bisquets mexicanos) that used yeast AND baking powder, which I thought was kind of odd. This led me to find a recipe for what are called angel biscuits in the US, which utilize three kinds of leavening agents–baking powder, yeast, and baking soda! And I thought, WTH?!

The fact that angel biscuits existed led me to question whether a yeast only version of biscuits existed, which led me to the Anson Mills website, where they addressed and researched already that very same question! And the answer to that question was no, there were no precursor recipes to the chemically leavened biscuit that involved using only yeast. Biscuits went from being flat to raised with chemicals at the drop of a hat. Crazy, huh? The closest thing that resembles biscuits are parker house rolls., but parker house rolls have milk and eggs in them, and are clearly rolls, not biscuits.

This recipe might seem a bit odd at first if you’ve never made a laminated dough, like danish dough, but by adding layers of butter to the dough and turning and rolling out the dough as specified, you create a very tender biscuit with crisp paper thin layers of buttery goodness that are easily split-able–perfect for using as sandwiches or spreading more butter and drizzling honey over it! I was going to make this a dessert by adding white chocolate, macerating strawberries, and also adding sweetened whipped cream, but partly I just got lazy, and partly also because they are actually quite versatile in that you can have them with something sweet, or with savory things, it’s your choice. Make your own breakfast sandwich, have it as a side, or have it with gravy too!

With the 3/4 cup heavy cream in a microwave safe container, heat in the microwave until just lukewarm and set aside. Aim for about 115 degrees F., which should feel like a comfortable warm bath.

With the 3/4 cup milk, do the same and heat it only to lukewarm. Add the sugar and stir to dissolve, then add the active dry yeast and stir gently, then leave alone about 5-8 minutes to bloom until frothy. Set aside.

In a medium bowl, add the flour and salt and stir with a whisk several times to mix well. Make a well and add the heavy cream and the milk/yeast mixture. Using your hands to mix the cream and milk into the flour, knead somewhat, then turn out unto a well-floured work surface and knead somewhat more. Dough will still be very unmixed in parts, looking a little scraggly. Turn bowl over the dough to cover it on the work surface and let rest for 20 minutes.

While dough is resting, cream the butter in a stand mixer with the paddle attachment. Run on medium until butter is light and fluffy. Detach the bowl from the mixer and scrape the butter from the sides into a pile in the center of the bowl and set the bowl aside.

After twenty minutes of resting, knead the dough for about 15 minutes. Dough should be smooth supple and elastic after kneading.  Wet your hands briefly before kneading if dough seems tough or dry.

Roll the dough into a rectangle 10 inches wide by 15 inches long. Spread the butter over the dough. Fold the top third of the dough down and the bottom third up toward the center, like a giant letter. You should have a rectangle about 3 inches by 9 inches. Turn the rectangle clockwise so that the shorter sides are on the top and bottom, and the open edge of the dough is facing right, like a book. Use a bench knife to block the sides of the dough. Set the dough on a baking sheet lined with parchment paper and cover with plastic wrap and refrigerate for 30 minutes. You have completed one turn.

After 30 minutes, dough will have risen significantly. Lightly flour work surface and set the dough on the work surface with the spine of the book on the left, as it was. Roll the dough into a rectangle again, 10 by 15 inches. Once again, fold the top third down and he bottom third up towards the middle. Once again, rotate clockwise one quarter turn so that it looks like a book with the spine on the left and the open edge on the right.

Repeat the rolling out and folding process one more time.

Return the dough to the parchment lined baking sheet and cover with plastic wrap and refrigerate for 30 minutes again.

Repeat the rolling out and folding process again after the second thirty minute resting period in the refrigerator, for a total of five turns. Refrigerate for another 30 minutes.

Adjust oven rack to lowest and middle positions. I did not have a pizza stone, but otherwise, the original says to place the pizza stone on the lower rack and heat the oven to 425 degrees F.

Line 2 baking sheets with parchment paper. Using a 2 and 1/4 inch round biscuit cutter dipped in flour, stamp out 15 biscuits, without twisting the cutter as you push down cutting the dough. Set the rounds on a prepared baking sheet, Gently reshape the remaining dough and re-roll it to about 3/4th inch thickness. Stamp out more biscuits with the flour dipped biscuit cutter. Repeat until you have about 27 biscuits. Brush the tops of the biscuits with more heavy cream or milk, using a pastry brush.  Let them sit for about 10 minutes to rest and recover from being formed.

Bake one baking sheet at a time, on the pizza stone, if you have one, on the lowest rack, for 15 minutes, then transfer to the middle rack and bake another 5 more minutes until golden brown.

Serve hot with anything! 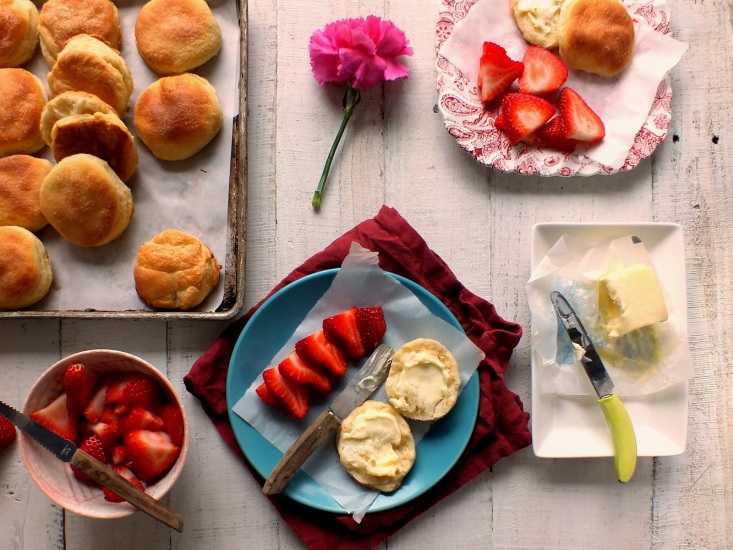