These are loosely based on Cookies of Joy, a 12th century recipe from a German Benedictine nun, Saint Hildegard Von Bingen. That’s right, you read correctly! 12th century cookies made by a saint! She was born 1098, and took her vows at 14. She went on to become an abbess, a writer, a composer, a mystic, an herbalist, and a physician, among other identities and accomplishments. Sort of a renaissance women before the Renaissance period! Here is a sample of her music:

And she believed in the power of her cookies. According to various sources, she believed these cookies had the power to uplift mood, dispel negativity, and contribute to overall health and well-being. She recommend eating these cookies often. I’m hoping Saint Hildegard isn’t turning in her grave because I decided to brown the butter and add Benedictine liqueur to the cookie dough.  I’d like to think she would approve of these additions. No doubt the recipe through the ages has already been reinterpreted and adapted to suit modern ingredients multiple times. Which is why I say “loosely based”.

Upon first glimpse, they may look a little plain. But trust me, they will grow on you, especially if you like crisp cookies! These are the kind of cookies that look somewhat soft right when you take them out of the oven, but quickly harden as they cool. Baking time is relative, all ovens vary somewhat, but for me, I noticed that the cookies had a slight chew to them if I took them out right at 10 minutes. If I took them out at 11 minutes, they were just perfectly crispy with a slight browning on the edges and bottom. At 12 minutes, a little too baked, and too brown for my taste. So roughly, 9 to 12 minutes, depending on how chewy or crispy you want them.

I was going to make a some sort of glaze or frosting with Benedictine liqueur, but honestly, it doesn’t need it. In fact, I think it would detract, as any other sweet addition would make them too sweet. I think they have just the right amount of sweetness.

If you don’t have spelt flour, you can use whole wheat or all-purpose flour. Also, you can forgo the extra step of browning the butter, but it’s such a simple step that makes a big difference that is well worth it, I think. 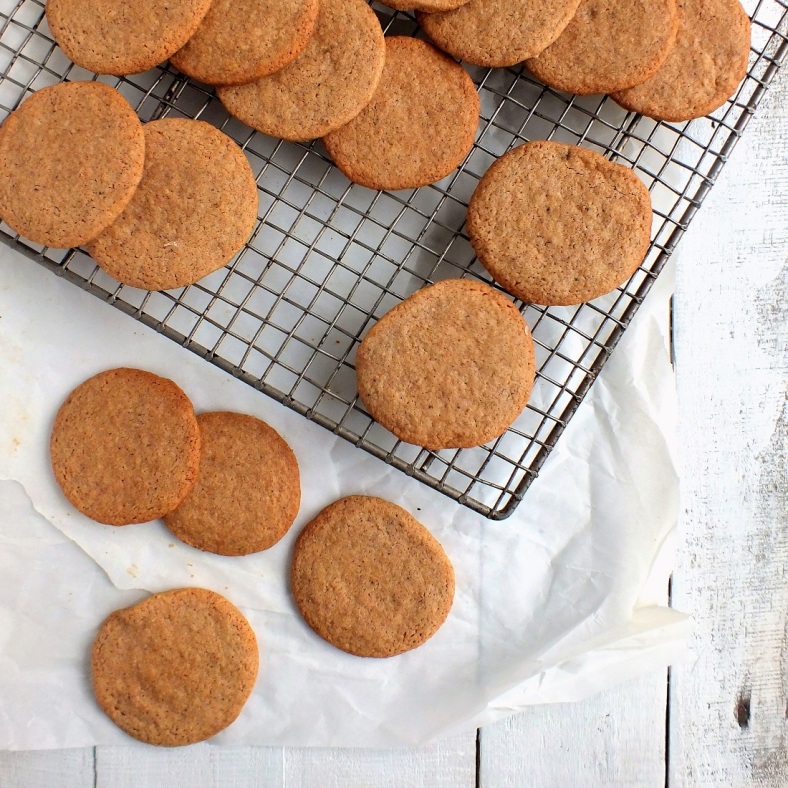 1/4 cup Benedictine liqueur (substitute B and B)

If using, prepare the brown butter by heating the butter in a small saucepan until milk solids are browned. Scrape into a bowl and cool until solid.

Sift the flour with the baking powder, salt, and the spices into a bowl and stir with a whisk several times.

In a medium mixing bowl, cream the sugars with the brown butter until light and fluffy. Add the egg and beat until incorporated. Add half of the Benedictine, if using, mixing it in before adding the second half and mixing again to incorporate the Benedictine into the creamed butter mixture.

Add half the flour mixture and beat again on low, then add the second half of the flour mixture, beating on low, until just moistened. Cover with plastic wrap and place in the refrigerator to rest for about an hour.

On a floured surface, roll dough to about 1/4th inch thick and use a round cookie cutter, or cutter of you choice.

Arrange spread about an inch and a half apart on the baking sheets lined with parchment paper. Bake for about 9-12 minutes, depending on how chewy/crispy you want them. 9 for slight chew to 12 minutes, toasty with no chew.

Let cool on wire rack. Enjoy! Makes about 3 and a half dozen medium-sized cookies.