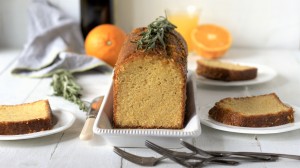 I almost called this the Big A$$ Orange Rosemary Loaf Cake. For obvious reasons. If you don’t have a Pullman loaf pan (13″ x 4″), or you just don’t want a big hulk of a cake sitting around (Why not, though? If it gets to be a few days old, you can always turn it into French Toast….mmmm), just cut the recipe in half and put it in a regular (9″ x 5″) loaf pan. You can also use a tea cake loaf pan (12″ x 4″ x 2½”), which is the same volume as a (9″ x 5″) loaf pan but is narrower and longer. Feel free to substitute whatever oil or fat that you like, but I like the olive oil for the fat because it really gives the cake a nice color, and oil tends to keep a cake moister than butter, especially if you refrigerate it afterward.

I initially made a couple of versions of this, one with specks of rosemary leaves throughout the cake, which I kinda liked, but it made the color a little less orange-y and the cake registered as a little bit on the savory side; the other version of cake was made with a lot less orange flavor (no extract, less zest). In the end, I felt the former had too much rosemary flavor, while the latter had hardly any orange flavor. I feel that this one strikes the best balance of the two flavors.

The rosemary is steeped in the milk for at least an hour and then you use the rosemary milk in the batter, but then you also add finely chopped or minced rosemary to the sugar syrup glaze that you make with freshly squeezed orange juice and additional orange zest that is brushed unto the cake in the end. Even though I finely chopped the rosemary, feel free to put it through a spice grinder or food processor along with the orange zest if the specks seem too distracting. I kind of like the little specks of rosemary or zest on the cake.

This is actually more of a quick bread or muffin batter type of cake, and less of a cakey cake. I feel like it is too cake-like to call it a bread, though. Also, is it a cake loaf or a loaf cake? Google and other search engines seem to favor the term “loaf cake” over “cake loaf”. Go figure. 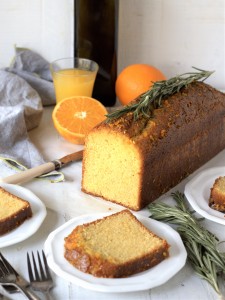 The cornmeal adds a nice toothsome quality and also color a nice color to the cake, and you can probably also use almond flour or almond meal with similar results. And if this doesn’t seem dessert-y enough, you can always serve it with a scoop of vanilla ice cream. I hope you enjoy!

Heat the milk in a small saucepan over a stove or in a microwave until almost boiling. Add the chopped rosemary leaves and let soak in the milk for an hour. Strain out the rosemary, making sure to squeeze dry before discarding the rosemary into the compost bin. Set aside rosemary milk to be added to the cake batter. Prepare the minced rosemary, about 1 Tablespoon worth, and save for the glaze later.

Prepare a Pullman loaf pan (13″ x 4″ x 4″) by spraying with baking spray and lining the bottom with a parchment paper that overhangs on two sides for easy removal of cake. Do not use the metal Pullman pan cover that usually comes with the pan.

Sift the flour, cornmeal, baking powder, and salt into a medium bowl and stir with a whisk several times to mix together. Set aside.

Grate the zest of about 6 large oranges to get about 5 tablespoons or more of grated orange zest. Divide in half. Add the first half of the orange zest to the flour mixture and stir with a whisk to evenly disperse zest. Reserve the other half of the zest for the glaze.

You can make the glaze now or while the cake is baking. Make the glaze by mixing 3/4 cup of freshly squeezed orange juice, with the 1 cup of sugar and add the 1 Tablespoon minced rosemary, 1 teaspoon of orange extract, and the reserved orange zest. Stir all together until it becomes a syrup. Set aside until needed.

In a medium bowl whisk or beat the sugar and olive oil with an electric handheld mixer with beaters. Add the eggs, one by one and blend, then add the 1 Tablespoon orange extract and blend again until all of the ingredients are thoroughly mixed together.

Add about one-third of the flour mixture to the olive oil mixture, beating on low with a handheld electric mixer or whisk just until all flour added is wet. Add half of the rosemary milk and beat again on low just until mixed. Scrape down the sides of the bowl and repeat with a second 1/3 of the flour mixture, beating, then add the rest of the milk and mix again and finally add the rest of the flour and beat again until thoroughly mixed in.

Pour into the prepared pan and bake for about 70 minutes, or until the edges are golden brown and sticking a toothpick into the center of the cake comes out clean, is not wet.

To glaze the loaf cake, place a large sheet of aluminum foil over a counter or baking sheet and when the cake is done, remove from the oven and lift the cake to the center of the sheet of aluminum foil. You can also just do this over a clean baking sheet, but I like how I can lift the foil to help the syrup go to areas of the loaf that hasn’t had a chance to be coated by the glaze. Slowly pour the glaze over the top of the cake, letting it drip down the sides of the cake. You can use a pastry brush to brush the glaze all over the cake, or just try to get all the surface of the tops and sides by moving the cake around in the foil or baking sheet. Lift the cake and let some of the glaze go under the cake as well. After all the glaze has been added, let it soak as much into the cake as possible.

Transfer the cake to a platter and place a long sprig of rosemary over the top as garnish. Slice and serve. 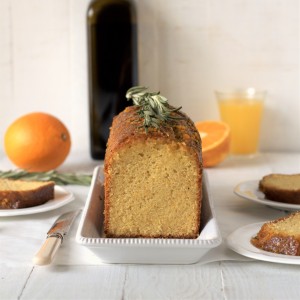