Happy April! These pop tarts may look rather plain and ordinary, but they are something special. Two things: Leaf lard and the fig-tamarind combo. I searched for a fig-tamarind jam combo online back in November, but didn’t find any, but now there is a company that puts out a Fig Tamarind Jam!! But since I already had some tamarind paste in my pantry, I went ahead and made my own. It’s really good because the tamarind adds a tartness to the fig jam where there was none. And leaf lard makes the flakiest thing you’ve ever made, and without really trying! 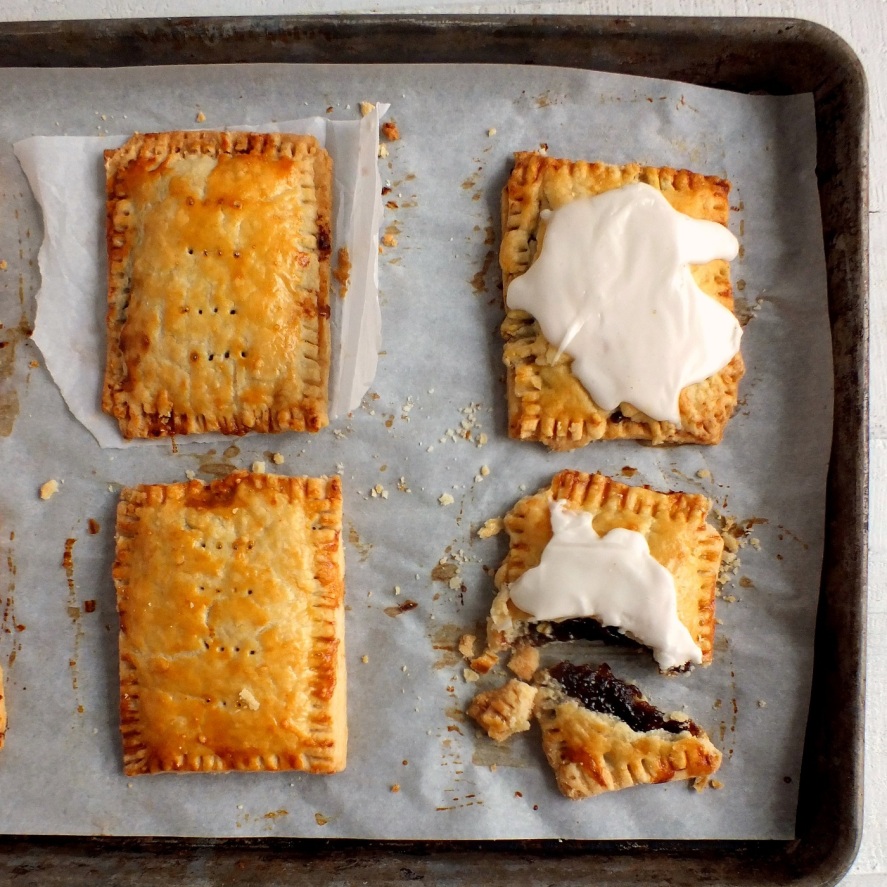 This was my second time using leaf lard, which I am really digging. For those of you unfamiliar with leaf lard, it is the fat from the area around the kidneys of a pig that has been carefully rendered into an almost odorless, tasteless soft and spreadable fat. It looks similar to vegetable shortening, but is actually somewhat more healthy, and makes pies and other pastries much flakier. 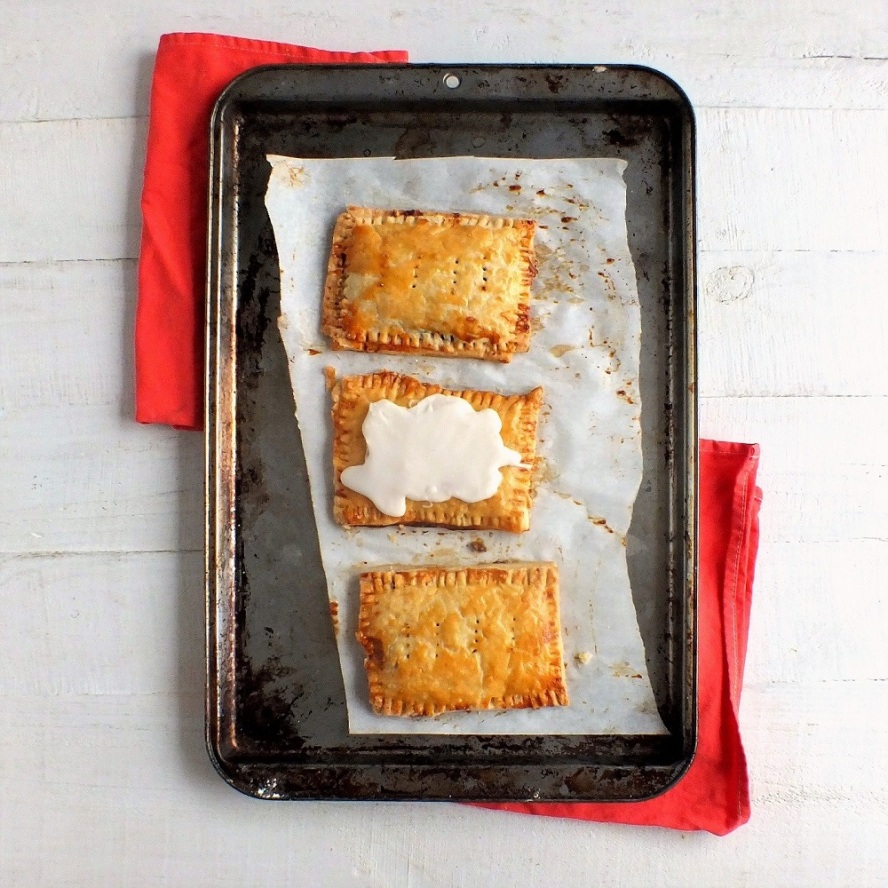 optional icing topping: I made a spreadable icing by mixing 2 cups of confectioners sugar, 2 Tablespoons of whole milk and 1/4 teaspoon of vanilla extract. Adjust to desired consistency by adding either more sugar or more milk.

Combine the flour, sugar, and salt into the bowl of a food processor. Add the butter and leaf lard to it and pulse until the mixture resembles a coarse meal. Slowly add some of the water, one tablespoon at a time, until the dough starts to hold together. You may not need all the water. Don’t overprocess.

Gather the dough together and divide in half. Form each half into a disc. Wrap each disc tightly and refrigerate for at least half an hour to overnight.

Make the filling by first combining the water and cornstarch and stirring with a whisk until dissolved and smooth. Add the fig jam and tamarind paste and stir again until combined thoroughly. Heat on medium heat until mixture comes to a boil. Simmer and continue stirring for about 2-3 minutes. Remove from heat and set aside until ready to use.

Remove each disc of dough from the refrigerator, unwrap one of them, and place on a cleaned floured work surface or counter. If it is very cold it may be too hard to mold, so let it sit for several minutes until it is softer and more pliable.

Dust the first disc of dough with a little additional flour and roll the dough to about an eighth of an inch in thickness, and form into a 9” x 12” rectangle. You will be cutting this larger rectangle into smaller equal rectangles that are 3” x 4” in dimension.

Unwrap and roll out the second disc of dough to the same dimensions and cut into the same sized smaller rectangles.

Prick the tops of these rectangles with the tines of a fork a few times. To create vent holes.

Transfer each of these rectangles above each of the nine bottoms with the jam filling spread and press down with the tines of a fork all on the edges on all four sides of each pop tart to seal.

Brush the tops of each pop tart with more of the egg/milk mixture and let them rest in the refrigerator for about 30 minutes.

Heat oven to 350 degrees F. Bake in heated oven for about 30 minutes or until tops are lightly golden brown.

Remove from oven to a wire rack to cool and frost with icing or glaze, if desired.