It’s Friday!! Happy Friday! And it’s my birth month, so I decided to share with you my new favorite thing! 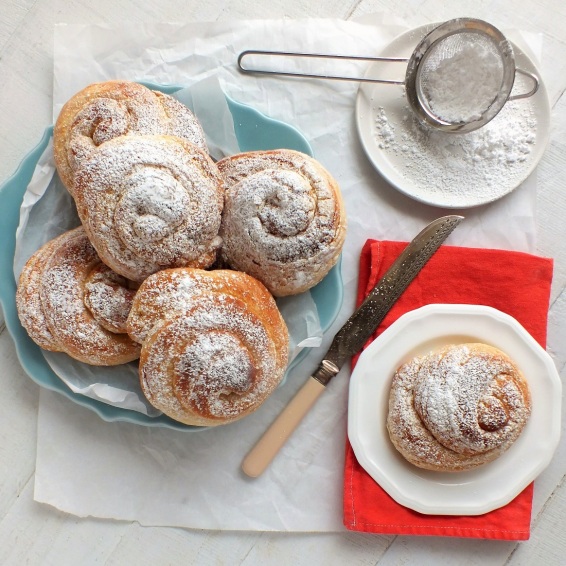 If you are Filipinx or Filipinx American, you may be more familiar with ensaymada (sometimes spelled ensaimada), which is a sweet bread roll that looks very similar to the ones I made above, but instead of confectioners sugar, they are topped with a combination of butter, sugar, and grated cheese. Being that my parents were both from the Philippines, but I was born and raised in Guam, that is the type I’m most familiar with. Guam is an island in the Pacific about three hours away by plane from the Philippines.

Before the internet, and before foodie blogs, I had no idea that ensaymadas did not actually originate in the Philippines, but rather, like a lot of things, were the result of Spanish colonization that resulted in other countries also having their own version of the ensaïmada. Puerto Rico has a similar roll, but they call it Pan de Mallorca.

Ensaïmada originated in the Balearic island of Mallorca, which is off the eastern coast of Spain in the Mediterranean. Everything I’ve read online suggests that the Mallorcans made these, and still make these, using saïm, or lard, not butter. You’ll notice that saïm is in the name.

I have to be honest, I wasn’t sure I’d like a sweet roll made with lard instead of butter. But that was only because I thought that there was only one type of lard. My only exposure to lard was in making Mexican tamales. After doing some online research, I realized that the best type of lard for sweet items like pastries is called leaf lard.

Leaf lard is the rendered fat from the area around the kidneys of a pig. If it is rendered properly, it is very white, smooth, creamy, and almost odorless. It is actually a tad healthier than butter because it is lower in saturated fat, and is a source of oleic acid, which is a monounsaturated fat. Oleic acid is the same kind of fat found in olive oil, which is often touted for its health benefits.

I say it’s a tad healthier than butter because, while eating a bunch of sweet pastries made with leaf lard would not exactly be a healthy thing to do, because excess dietary fat is still excess dietary fat, at least it would be somewhat healthier than eating a lot of pastries made with higher amounts of saturated fats, or worse, partially hydrogenated fats. The hydrogenation of fats creates trans fats, which are are partly to blame for the development of heart disease and type 2 diabetes in modern society. But I digress…

I was able to get good quality leaf lard from a company online that had mostly very good reviews and had products that were only from pasture-raised animals, but sometimes you can find leaf lard through your local butcher, or at a farmer’s market. If from your butcher, you may need to render it yourself, but sometimes butchers can render it for you. I’ve heard it’s not too complicated to render it yourself, but I didn’t want to mess with that, and I’ve heard it can sometimes make your place smell kinda rank and gnarly.

These rolls were actually really easy to make. They are not complicated, but there is a long fermentation period to contend with. I was really happy with how they turned out. Plus it immediately made me want to try out using leaf lard for other sweets and pastries that traditionally use butter, so stay tuned for more stuff with leaf lard in it!

If you want to make them more traditional, you may want to make fewer but larger rolls that are meant to be cut into sections and shared. You may also want to coil each roll clockwise and to coil it very loosely. I’m noticing all the traditional rolls online tend to be more evenly raised, and I learned that it is because they were coiled very loosely; some even so loose that the dough wasn’t touching, so that the dough could expand without causing it to rise vertically. As you can see in the photo above, I didn’t quite follow these rules. They were still pretty durn tasty. There’s always next time, I guess. Enjoy!

ensaïmada (based on this recipe)

Proof the yeast in the milk with just a pinch of the sugar, first stirring it gently, then leaving it alone for about 5-10 minutes, until bubbly and frothy.

Place about half of the flour into a mixing bowl and gradually add the milk/yeast mixture while stirring. Keep stirring until the mixture forms a dough, then cover in plastic wrap and place in warm spot in your kitchen and allow to rise until doubled in size, which takes about an hour depending on how warm your kitchen is.

After the dough has doubled, add the eggs, one at a time. Use a spoon or your hands to incorporate the eggs into the dough. Caution, this will look and feel like a hot mess! You might question your very being. Just keep with it. Add the sugar and continue to stir or work with your hands. Add the remaining flour, and continue to mix until a dough forms and knead it for about 5 minutes. Form into a ball and cover with plastic wrap and allow to rise in the same bowl 30 to 45 minutes.

After the second rise, lightly flour a work surface that is about a 24-inch square. roll out the dough very thin to cover the entire square area. Using your hands, spread the leaf lard evenly to cover the top of the dough completely.

Roll up the dough as if you were making a jelly roll. Cut into rounds about 1-inch thick. You should have about 18 rounds. the reason you may not have 24 rounds is that the dough might shrink a little in length when it’s rolled up. Transfer each roll to a plate or tray temporarily.

Line a couple of large baking sheets with parchment paper. Set aside.

Flour lightly the work surface again, and take one coil at a time and roll it to a long rope shape, about 8-inches long. Then loosely roll it up clockwise so that it looks like a shell. Try not to roll it up tightly, unless you prefer it to expand upwards.

Place each rolled up roll on a baking sheet. Leave a lot of space between each roll, as they will expand quite a bit, maybe even triple in size. Allow to rise until doubled or even tripled in size, preferably overnight. The original recipe did not say to keep it in the refrigerator, so I placed mine in my oven, making sure it was turned off.

In the morning, bake for about 15-20 minutes, until browned on top. Allow to cool somewhat for about 15 minutes before sprinkling with confectioners sugar and serving.