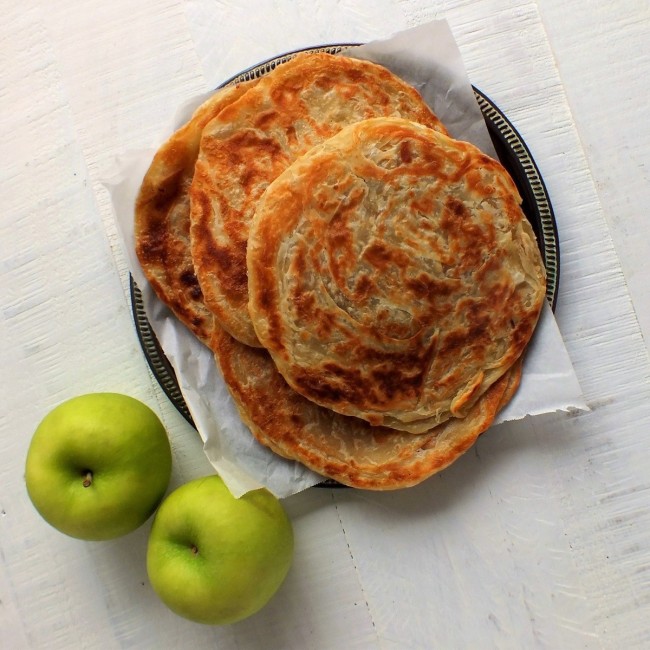 I was thinking of making something that you wouldn’t need to make in an oven, because June makes me think of warmer weather when one might want to avoid working with a hot oven, and this spiced apple paratha recipe totally fits the bill. I know, I’m a little early. 🙂 This recipe makes four spiced apple-stuffed parathas, although you can also make 8 parathas with grated apple layered into the dough rather than sandwiched between 2 discs of flattened dough. I chose the latter because I wanted something that holds more grated apple in the middle. It’s entirely up to you, although the thicker, two-disc versions that are shown here are harder to cut through with just a fork. In retrospect, it really would’ve been easier to eat them with a fork and knife, although one other idea I had that would negate the need for utensils altogether, would be to use a paratha like a soft taco shell, and to refreeze it after stuffing it with ice cream! Hmmm, I still might try that! Doesn’t that sound good?

Paratha is an unleavened flatbread that originated in India. The word paratha is an amalgamation of the words parat and atta, which literally means layers of cooked dough. (Thanks to Wikipedia for this succinct definition!) Paratha is thicker than a chapati or roti in that it is coated with ghee or other types of fat, and layered by folding the dough multiple times before being cooked.

Paratha can either be plain or stuffed. If stuffed, it can either be because other ingredients used as a filling can be folded into one disc, flattened and then cooked, or else two separate discs of dough are used with a filling in the middle, and the edges are sealed together before the whole thing is cooked, usually in a pan with some ghee. I chose to make the latter but you can also make these using eight single pieces of dough and simply layering in the apple filling along with the ghee before cooking.

I wanted something that was reminiscent of apple pie but still wanted to stay true to Indian paratha. Judging from recipes for paratha, I think the majority of them are savory, but you can also make them stuffed with something sweet. These are stuffed with grated, spiced apples that have been sauteed in a little butter and sugar. Sauteeing them brings out the flavor combo of the apples and the spices, and also makes them less watery, which will help keep the inner parts of the paratha from getting too soggy.

The flakiness of paratha reminded me of a pie crust, even though it is accompanied more with an elasticity rather than than the tender crumbliness of a pie crust. And that’s because even though the two have virtually the same ingredients–flour, water, butter, salt–one of them has gluten development, which adds to the chewiness and elasticity of it. 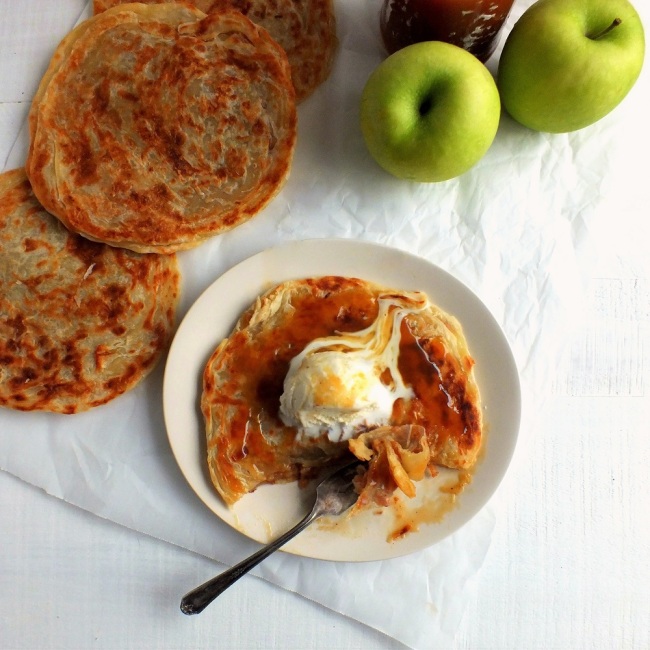 And so, in thinking about pie and pie crust, I chose to make something reminiscent of apple pie by topping it with a scoop of vanilla ice cream and a homemade caramel sauce. Although I think they are still pretty good even without the ice cream and caramel sauce. When plain, they make a great grab-and-go snack. When you add the caramel sauce and ice cream, they become more of an elegant sit-down dessert. Both ways are enjoyable, it just depends on how you want to enjoy it.

They sort of reminded me of a cross between a crepe, a quesadilla, and a pancake. These are best enjoyed right off of the skillet because the outsides are crisp, and when the heat slightly melts the ice cream, it is heavenly!

3 cups all purpose flour, plus more for rolling

About 1 and 1/2 cups of coarsely grated apples, Granny Smith or other favored apple–peeled, seeded, and cored before grating

Combine the flour and salt into a large bowl and stir with a whisk several times until salt is well dispersed within the flour.

Add the water to the flour and rub into the flour with fingers until it comes together about one minute.

Knead the dough for about 5 minutes until it forms a sticky ball. I kneaded it on a clean lightly floured surface.

Transfer back to the bowl and cover with plastic wrap for at least an hour, or in a refrigerator overnight, or up to 24 hours.

After the dough has rested for at least an hour, or up to a day, divide into 8 equal pieces, and form each into a ball, keeping each ball under plastic wrap or a moist towel while forming other pieces of dough into balls.

While the rest of the balls are under plastic or a damp cloth, roll one ball as thin as possible, to about 1/8th inch thick and about 10 inches by 16 inches, if possible.

With a small offset spatula, spread about a tablespoon of softened ghee all over the top surface of the flattened dough and sprinkle a pinch of flour over the ghee.

Roll starting from one of the long edges tightly until you have a rolled up piece of dough, then start to coil each end toward the center until you have two coils.

Fold to press together one coil on top of the other and press firmly. Do this to each piece of dough and let them rest under a piece of plastic for at least an hour, and up to 24 hours in the refrigerator.

(Please have a look at the Serious Eats link above for video instructions if these steps aren’t clear.)

If coiled dough balls have been left in the refrigerator, bring out and let sit on the counter, still wrapped in plastic, for about 20 minutes.

Make the apple stuffing by first peeling and coring an apple (or one and a half to two apples, if apples are small)

Coarsely grate the apple or apples, until you have about 1 and a half cups.

Place a tablespoon of unsalted butter in a saucepan and let it melt on medium-high heat. Add the grated apples, cinnamon, nutmeg, sugar, and salt to the saucepan and saute for about 5 minutes, until somewhat browned and fragrant. Remove from heat and let cool until ready to use.

On a clean counter top that has been dusted lightly with flour, roll out each dough ball into a circle about 8 inches in diameter, and about 1/8th inch in thickness.

For four of the discs of rolled out pieces of dough, spread about 1/3 cup of the sauteed grated apple and spice mixture over the tops of each.

For the remaining four discs that haven’t been topped with apple, place each of them over the ones with grated apple and press and clamp down the edges together with the bottom disc so that the apple filling can’t seep out. You should have 4 stuffed parathas ready to be heated on a skillet.

On a dry skillet with medium-low heat, heat up each side for about 3 minutes. After both sides have been heated, remove from heat and do the other three stuffed parathas this way.

At this point, after all the parathas have been pan fried initially for 3 minutes on each side, the parathas can be cooled and stacked between sheets of parchment paper or in plastic bags and stored in a refrigerator for up to a week, or up to 3 months in a freezer.

When all are done, turn up the heat to medium-high. For each of the four parathas melt about a half tablespoon of ghee for each side and evenly spread it on the skillet. Continue to heat each side for about 1 minute or two until nicely browned and adding a half tablespoon of ghee per side. These may take a little longer depending on the thickness of the dough and the stuffing. The trick is not to get it too hot so that the outside gets too brown before the inside has had time to warm up.

Serve with your favorite toppings, like vanilla ice cream or homemade caramel sauce, or eat plain.