I know what you are thinking: Why on earth would you make a loaf of yeast risen banana bread for the sole purpose of turning it into a banana bread pudding? Wouldn’t it have been easier to just add bananas to a traditional bread pudding recipe? The answer is: Because I had time, and yes, I could’ve taken the easy route, but where’s the fun in that? 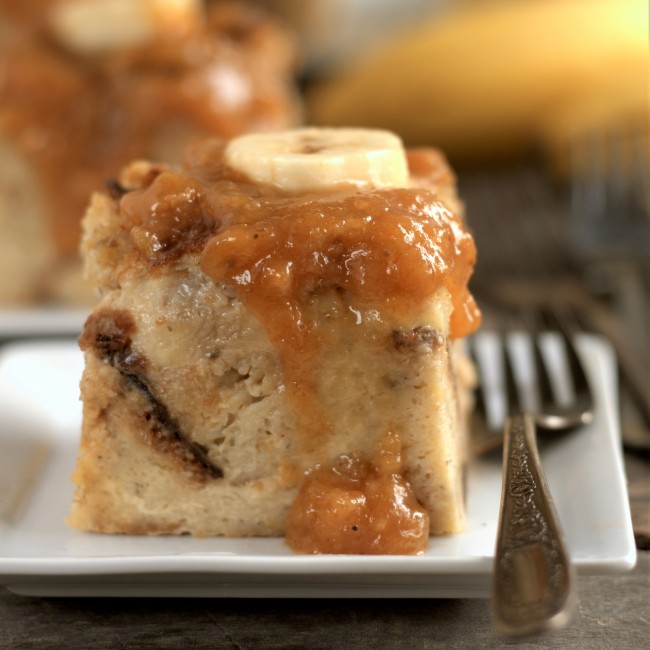 Needless to say this was a little time consuming. I have to be honest, I’m not sure if taking the time to make a yeast risen banana bread (and one with a slow, 24-hour rise at that) solely for the purpose of using it in a bread pudding recipe is worth the effort in terms of banana flavor, but Ben sure loved it. Then again, he’s a big banana fan, so he loves anything with bananas in it, no matter what form. I like bananas enough, but I’m a little judgy about the taste and/or texture of U.S. store-bought bananas, which are so bland compared to bananas I’ve had in Guam and the Philippines; that is what prompted me to think up this recipe in the first place. I wanted banana flavor without putting a lot of raw bananas in it. I wanted strong banana essence without the slimy texture that usually accompanies it.

So what’s the verdict? I will say that the banana caramel sauce really rocked, and if I were to make this again, I’d double it. I had some on toast with a little peanut butter today and it was great! The roasted bananas combined with the caramel gave the sauce a compote-like quality to it and also made it less sweet. I was worried I wouldn’t like the texture, but roasting the bananas first and then putting them in a food processor to puree them really helped, and the sugars from the caramel gave the sauce a necessary boost to the flavor of the bananas. 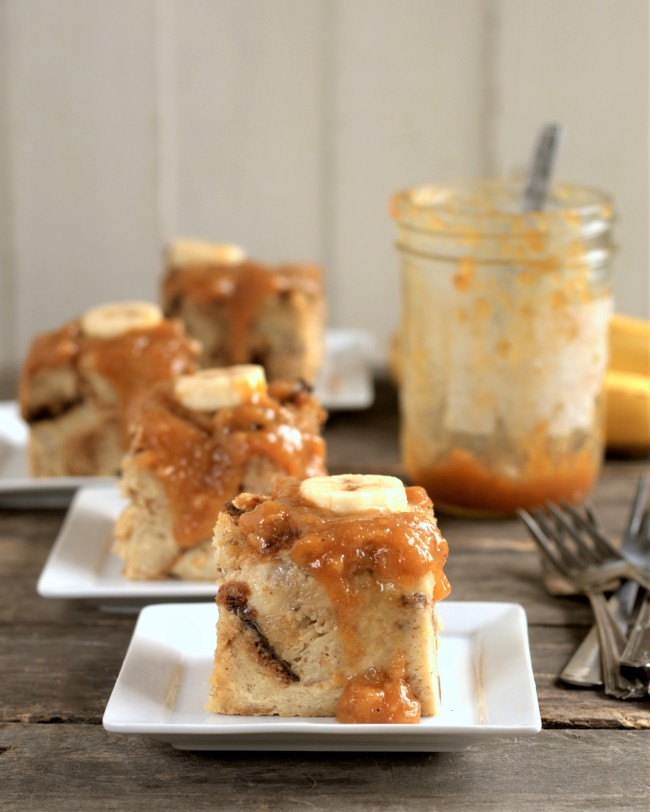 After waiting hours to finally taste this, my first thought was, “Oh…okay. I could’ve just used day old bread for this.” I did get a lot of banana flavor, but I think it was coming mainly from the banana caramel sauce. So my advice is, if you are pressed for time or just don’t want to make a loaf of yeast risen banana bread that utilizes a slow rise in the fridge for about a day, you can use a banana yeast bread recipe that doesn’t require such a long, slow rise, like THIS ONE, or just use a store bought baguette or other rustic loaf of bread and double the banana caramel sauce, and use sliced bananas on top only as a garnish when serving.

One thing I noticed about using a “rustic” loaf that has a fairly dark and textured crust is the lovely pattern or “striations” on the side of each serving as you cut and serve the bread pudding. If you cut the crust off beforehand or use a bread that doesn’t have such a dark crust, you may not get this lovely pattern on the sides. Just an observation. But overall this was bananarific! 😉

demerara or turbinado sugar, for topping before baking

1 banana, cut into slices for garnish (add a few drops of lemon juice on surface of banana slices to keep from browning)

In a medium bowl, combine the eggs, yolks, milk, cream, vanilla extract, rum, sugar, nutmeg, cinnamon, and salt to it. Do not overbeat or overmix. Pour over bread cubes and let sit for an hour, pushing down bread cubes as needed to get them to absorb the liquids.

Bake for 45-50 minutes on the middle rack of a 350 degrees F. oven until the top is lightly brown and toasted. Internal temperature should be 160 degrees F. Serve warm with the rest of the banana caramel sauce and some banana slices, if desired. Store leftovers covered in the refrigerator. Reheat before serving. Keeps for a few days.

If bananas are not overripe, peel bananas and roast at 400 degrees F. in a baking pan for 20 minutes, then puree in a food processor.

In a small saucepan, place the sugar and water and trace the bottom with a clean finger to ensure all the sugar is moistened with the water. Add the lemon juice to prevent the sugar from crystallizing. Bring to a boil on medium heat and wait for it to turn a fairly dark amber color. Feel free to swish the contents to even out the amber color, but don’t stir it. Color must be fairly dark amber, but not burnt. Using medium heat helps prevent it from getting too dark too quickly.

Once desired color is achieved, remove from heat and add the roasted pureed bananas while stirring constantly with a whisk. Be careful of the steam while whisking, because it will get bubbly and a lot of steam will rise. Whisk in the cream, salt, vanilla extract, and butter.