I’ve been interested in doing a post on these for a few years now but lost interest when I couldn’t get it right, not once, but twice! Around two years ago, I twice didn’t give enough time for a loaf’s second rising, and as a result, each of the two loaves I made had a blow out on the side!

I learned the hard way that not enough fermentation time for a dough usually means it will have a blow out on the top or side of the loaf. I also learned that we in the Gonzalez household tend to like our premises cooler in temperature. Which is why even the time I did allow for the second rise, it was not long enough! If your kitchen is cool like mine, it can take twice as long for the second rise. So keep that in mind.

These are, in my opinion, the best of the pan dulce in the bakery. When I saw them for the first time, I was like, Oh no they didn’t! But they did! They just sliced up a loaf of bread and patted it with a sweet buttercream! And it instantly became my favorite pan dulce, even surpassing the conchas! 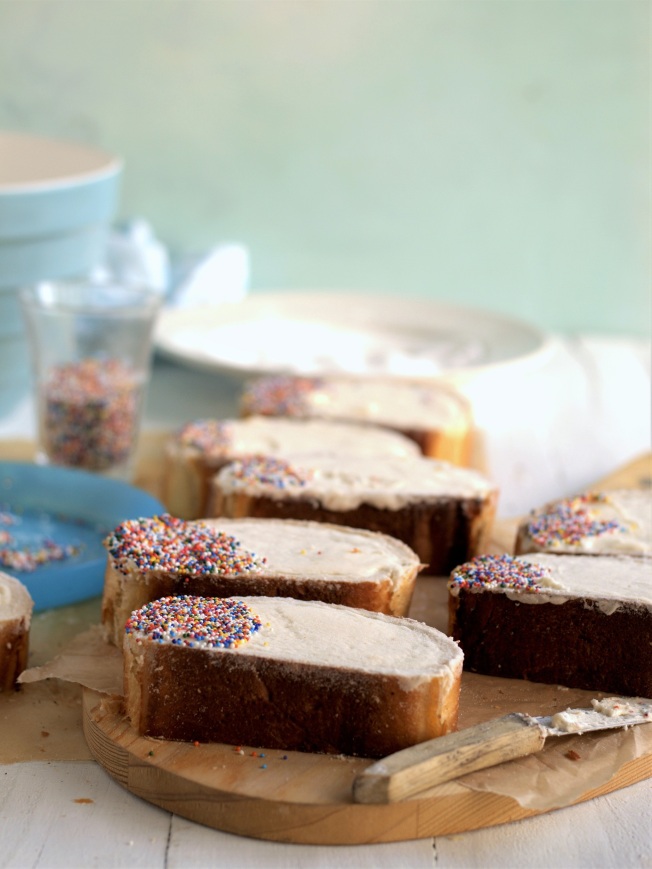 Place the milk into a bowl and take about 1/4 teaspoon from the sugar and add it to the milk and stir, then add the yeast to the lukewarm milk and gently stir again, then leave it alone for 5-10 minutes until the milk is bubbly and frothy. Start over if milk isn’t bubbly or frothy after that time period.

Place 2 cups flour into a medium bowl and add the salt, cinnamon, nutmeg, the remaining amount of the sugar. Stir with a whisk several times to ensure flour ingredients well dispersed.

When all the flour is moistened, dough will be very sticky. Keep stirring with a wooden spoon and eventually you will see a dough form. Add a Tablespoon of flour at a time, maximum 3 Tablespoons, if needed, to help remove dough sticking to the spoon or your hands. Scrape dough onto a well floured work surface and knead for about 8-10 minutes.

After kneading for about 8-10 minutes, the dough should be smoother and elastic. Shape dough into a ball and place in a well-oiled bowl, turning once to coat the entire surface of dough with oil.

Cover the bowl tightly with plastic wrap. Leave bowl undisturbed in a warm area without a draft, until dough is doubled in size, about an hour.

After the dough has doubled in size, punch ball of dough down to deflate, transfer to a floured surface, knead it a little, and pat down and shape into a square, roughly one foot on each side.

Starting from the side closest to you on the counter, roll the dough tightly so that you have a sausage shape of dough. Tuck down the sides and keep the seam on the bottom of the dough.

Place the loaf on a parchment paper-lined baking sheet parallel to the long sides and in the center, and cover loosely with a piece of plastic or towel.

Let rise a second time, about 1-2 hours, depending on the temperature of your kitchen. You can tell it’s ready to be baked once you indent the tip of your finger on the surface of the loaf and it doesn’t spring fast at all.

When ready to be baked, whisk egg wash ingredients together. Remove plastic or towel and brush the entire top surface of the loaf with egg wash.

Bake loaf at 350 degrees for about 30-35 minutes, or until browned on top and knocking on the top yields a hollow sound. Remove from the oven and let cool on a wire rack.

When cooled, cut into equal thick slices, slightly thicker than an inch.

Make the buttercream spread by beating together a cup of confectioners sugar with a 1/2 cup of unsalted butter.

Spread on the tops of each slice with the buttercream, then dredge the tops with some granulated sugar

If you want to decorate the tops further, spread a little more buttercream on a top corner of a slice, then press down on a small saucer of colored dragees or other similar toppings.