Good Morning! If there was one constant on my recent trip to the Philippines, it was daily pandesal. Usually in the morning at breakfast. And I’d just have one, usually with margarine, along with other breakfast items. But you can also have it for an afternoon snack, or merienda, and stuff it with other things, like cheese, or a meat.

And when I saw signs at bakeries for “Malunggay Pandesal”, I just assumed that it was for the names of the bakeries. Only later did I realize it was for pandesal that contains malunggay leaves, and immediately started thinking that this was the first thing that I was going to make and blog about when I returned home in Seattle. I already knew I could make this, because my local Asian grocer sells bundles of fresh malunggay.

For those of you that are not familiar with either malunggay or pandesal, let me break it down for you:

Pandesal is said to be a Filipino equivalent to what the baguette is to the French; it is an everyday, multipurpose kind of bread, although different in that the dough is often enriched with egg and milk, to compensate for the lack of available high-quality flour. It is slightly sweet, but not like a sweet roll. Because it is neither exclusively sweet nor savory, it is versatile and can often be eaten with other foods for breakfast, as a snack, or merienda, either by itself, or paired with butter, margarine, cheeses, or meat. They are light and fluffy on the inside, but with a harder outside shell, made slightly crunchy by the breadcrumbs. One of the qualities or traits that make this bread unique to the Philippines is the dusting of a fair amount of breadcrumbs before being baked. You can probably make this without the breadcrumbs, but I think most Filipinos, including myself, would think that something was missing. It is a defining characteristic of the Filipino pandesal. It could probably be considered the national bread, if there was such a thing.

Malunggay (also called moringa), is a plant in the Philippines and other Asian countries, as well as in some African countries, whose leaves are often used in savory dishes, like soups and stews. The leaves are a rich green color, especially when they are first slightly steamed or cooked. My mother used to make Chicken Tinolang, which is a chicken stew with these leaves, among other ingredients.

Malunggay is not strong in flavor, but it did remind me of spinach, and I thought this would be a great bread to stuff with cheese. Or maybe even put some parmesan in the dough! Malunggay definitely ups the nutritive value of the bead, being that it is a good source of many vitamins and nutrients, without getting in the way of flavor or enjoyment.

I also didn’t add any granulated sugar, but I did use one tablespoon of honey that I used for the blooming the yeast before adding it to the flour in the mixing of the dough. It could probably stand to use 2 Tablespoons more of honey or other sweetener, if you prefer. 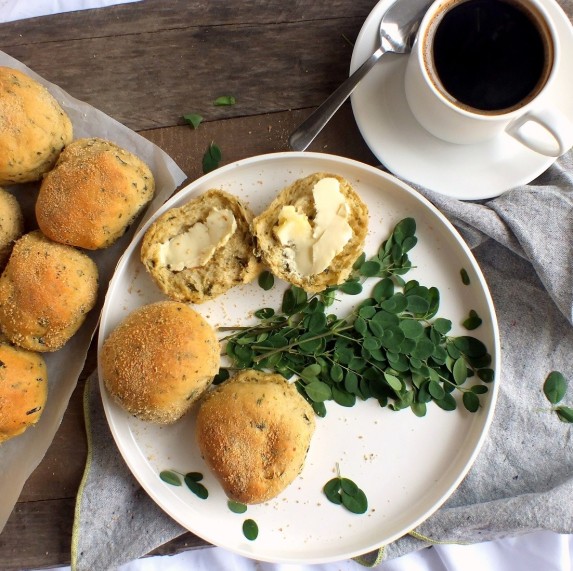 4 Tablespoons margarine, melted (If using unsalted butter instead, add 1 teaspoon salt to the flour when mixing the dough.)

First, bloom the active dry yeast. In a small bowl with lukewarm water, add the honey and stir to dissolve. (Since my honey was cold and not pourable, I made sure the water was slightly warmer to get the honey to dissolve, then waited for it to be lukewarm.) Add the yeast and let it alone for 10 minutes.

While yeast is blooming with the honey, in a food processor, add the malunggay leaves, margarine, and oil, and pulse for a short bit, just until leaves are coarsely chopped. You can also just manually chop leaves and mix the margarine and oil into it in a bowl.

In a stand mixer with the dough hook attachment, place the flours, half the milk, egg, and the yeast/honey mixture and mix on medium for a minute. Stop the mixer and scrape the bottom and start the mixer again on medium, slowly adding the rest of the milk to dry areas, until dough starts to form. Continue to mix dough for a few minutes, and add the malunggay leaves/margarine/oil mixture in increments until fully incorporated and mixed in with the dough.

Continue to mix on medium/high for a few more minutes, until dough appears smooth and elastic and cleans the sides of the bowl as it mixes, it should be somewhat sticky, but not too hard to remove from the dough hook and bowl.

Remove from the bowl, form into a ball and place in a bowl lightly coated with oil, turning once to coat all areas of the dough. Place plastic wrap or a cloth over the top of the bowl and leave it in a warm place, until doubled in size.

When doubled in size, punch dough down to deflate and knead by hand for a minute. If you want to make the rolls the next day, you can put it back into the bowl and cover again with plastic wrap and place it in the fridge.

When ready to make rolls, take dough out of the fridge and let sit in the bowl on a counter for about an hour. Then divide the dough into 20 equal parts. I had a weight scale, so was able to weight the dough and divide them equally into 20 pieces that I rolled into balls, but you can also just make a roll of dough about 20 inches long, like a sausage, and just eyeball or estimate the size by cutting the roll in half, then cutting those halves in half, which would give you four equal parts that you could then cut into five equal pieces.

Roll each in a bowl of breadcrumbs, coating all areas of each roll. Do not skip this step, since this is the most definitive thing that makes it Filipino Pandesal.

Place on a baking sheet, each roll spaced about one inch apart from another. Cover with plastic wrap loosely and let sheet sit in a cool area for about another hour or so, depending on the heat and humidity. Do not let dough over-ferment, though.

Rolls are ready for baking when poking a finger slightly in one of them doesn’t make it spring back right away but takes a couple of seconds. Dough is over-fermented or spent if dough doesn’t spring back at all, and it isn’t because it’s too cold.

Sprinkle with extra bread crumbs on any roll that appears to be lacking breadcrumbs on tops.

Bake at 350 degrees F., for about 20 minutes, until golden brown and fluffy on inside with a harder exterior on outside. Cool slightly before enjoying with your favorite meats, cheese, spreads, or even by itself!

Oh yeah yellow leaves too.
Brownies with a little Nutella and coffee extract and espresso powder. Nothing but fudgy goodness here. Why does ‘fudgy’ sound like a nasty word?
I’m a sucker for the leaves of red.
Pumpkin Empanadas. Not bad but next time I’m not adding molasses. I was hoping to add more flavor without changing the color of the pumpkin. Oh well. Time to freeze these.
Sour cream and onion dinner rolls! Happy Friday!
herbed mushroom goat cheese scones.
Mississippi Mud. There’s a ton of recipes out there so find one that suits what you’re looking for. For me, I thought about the kind of mud I’d want to eat. Mud that is not too heavy, more like a mousse instead of a brownie, still topped with a chocolate pudding, and with a slight hint of coffee or mocha. And of course whipped cream. Chocolate shavings. The key is to give it time to set in the fridge before digging in.
Apple Pull Apart Rolls! Recipe modified from King Arthur Flour.
I just enjoy these. That is all.
Chicken soup for a grey autumn evening.
Simple grated apple semolina cake. Two bowls, no mixer required.
Apple Cinnamon Pull Apart Bread…what an unexpected hot mess! In a good way tho.